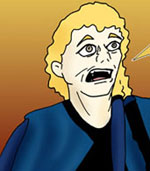 Biste is one of Trasik and Riley's brothers, and not a nice brother either. He was the first brother on Trasik's behalf to fight Lexx, being a jerk who agrees with Trasik's view, and likes Trasik more than Riley.

Biste's fortunately too arrogant to use Riane in a way other than gameplay. Inter-species relationship type things are usually frowned upon and when it comes around to it, Riane is definitely NOT under his control. At least.. this is in Biste's case.