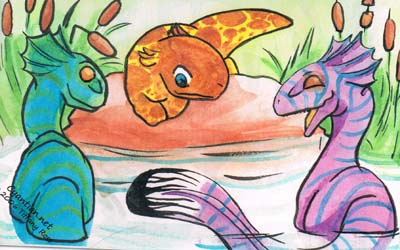 In many ways Aquatic Shivae are similar to their land-born brethren, but there are some differences.

Aquatic Shivae are equally at home on land and in the oceans and rivers of Cyantia. They are primarily found on the coasts, and near rivers, lakes and streams, but tend to live near the water rather than in it. They do not tend to wander too far from water to avoid drying out their skin, causing painful cracks and wounds. They do have gills, but can also breathe air.

They are a little longer in body than terrestrial living Shivae and stand four to six feet tall at the shoulder, depending on the subspecies. They can be located far north and south and get fatter the farther north they're located for obvious reasons of needing insulation. The salt water varieties tend to be larger than the fresh water ones (whose size varies widely depending on their diet when young), with some kinds living in both types of water.

Their coloration is similar to land Shivae in that they are dark on the upper side of their bodies and lighter underneath. Their coloration can be any color, but greys, white, blues, and black are more common, and most tend to have white undersides. White striping or spots is common, along with splashes of bright reds and gold streaking over their heads and necks.

They have very little fur, being almost smooth skinned, and have fin-like ears rather than the traditional feathers. They also have a fin that runs down their back, and a paddle/fin-like tail.

They can go cold, but for much shorter distances than land Shivae.

Rather than the males being driven out at maturity, all chicks remain with their families as long as they want, though many wander when they are about to reach maturity.

Some Aquatic Shivae have ray-like wings.