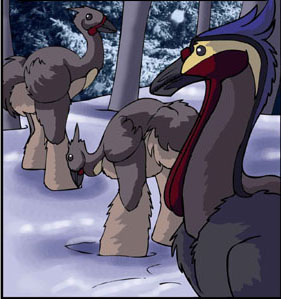 Large flightless birds that somewhat resemble Moa Birds. They are large with relatively small wings, mostly gray, have a large rounded tail (much like a bunny), and thick furry legs.

Some (possibly the females) have a short wattle like a chicken, being a solid dark gray on top and small gray crest with light gray belly and legs. The others are slightly more brightly colored, being dark grayed in body, but with a bright blue crest, yellow eye stripes, and red cheeks, with a wattle that goes down to the base of their neck.

They run fast, have teeth in their beaks, and claws. They also kick hard.

The bird can't do anything if it's grabbed around the neck by something that's either massively bigger or light enough to keep from knocking it down, but also get a good hold. If the bird goes down, whatever is attacking it can get severely wounded if it doesn't have a good hold. Even something Taun's size might get wounded if it's not distracted.

They sense that their pursuer is not really confident if it doesn't actually RUN at them, and will fight back in such situations. (When Taun sent Vas against them, Taun's intent was just to have Vas CHASE the birds, but because he didn't keep running at them, they turned on him.)

This category currently contains no pages or media.