This is a domesticated species seen in Shivae!. They stand roughly 3 feet high, are thick bodied (like a bear), have very long fur and manes that hide most of their bodies and occasionally their eyes and paws, a short muzzle, and some have long curling horns like a ram. The fur is sheared and used to make clothing.

They come in several varieties. The gray type has coarser fur that is considered to be of poorer quality than the others, though still makes warm garments. There's also a variety that comes in black or white that produces smoother, higher-quality fur. 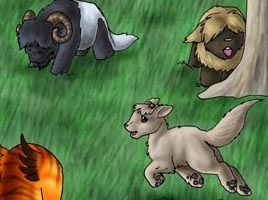 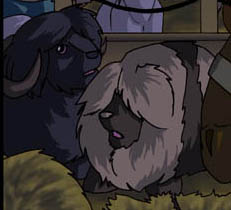 There's also a curly variety of them seen in Sink or Swim.

Known as Cimelle Sheep on the mainland, these look like curly haired sheep with paws.

The Jilaic on Aciace raise them for milk, cheese, and wool. They are not good for carrying things, like the Galpian and Roallie.

The Jilaic also make a delicious beverage known as black seed tea, which is harvested after the seeds have been digested by the Cimelle Sheep.

This category has only the following subcategory.