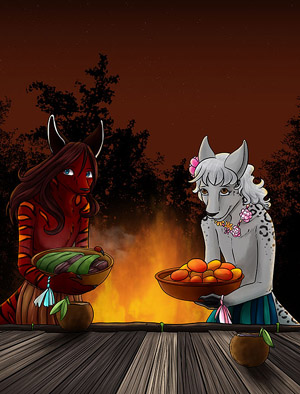 Earth Roos and native Cyantian Roos are almost exactly alike, except the Cyantian Roos have wider heads and their forearms are more useable and plus, of course, they have thumbs. Their completely flat chested, and when compared to EG Roos, are shorter, don't stand as upright, nor walk on their toes, or at all due to the legs not operating separately of each other, thus having a gait like Earth Roos. They usually don't have excess hair on their heads and if they do, it's not thick. Braids are common on the natives.

Babies are indeed born to the natives a little bit larger than earth Roos, but they nurse in the pouch (where the mammaries are located, though they do not get large), and are kept there most of the time until they're about a year old. They grow quickly, compared to a human baby, but very slowly compared to an actual Earthen kangaroo.

They live in villages and worship the great golden winged Scythetail. (Sink or Swim Chapter 3, strip 10) Syke has a script for Sink or Swim that features a Jiliac village on an island. They're fine in the village and in groups AND have Scythetails as guards and things, including winged ones which tend to belong to the chieftain and higher up members of the village.

And yes, they would have a negative opinion which filters over to just about all of the non native Cyantians.

They have tons of stories, though few have been recorded. Some of their lore is rather weird by others' standards. (Sink or Swim, strip 181)

This category has only the following subcategory.

The following 4 pages are in this category, out of 4 total.