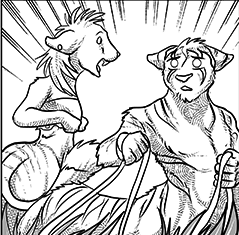 Rifier are the centaurs of Cyantia (although they may be uplifted, but not by the Rumuah) that live primarily on the continent of Aciace. Their upper torso is rabbit-like, with long ears, while their lower torso is like that of a large cat, complete with paws and long tail. They are fairly athletic, thin and trim. They have two hearts, with the lower heart being larger than the upper, but are not built for stamina on land. They have an extra set of lungs in the rib cage of the lower torso (not connected to the mouth and nose) which function as gills (with slits in the rib cage) when swimming that seal up when on dry land. They are very susceptible to injury if kicked or struck in the lower rib cage, and a ripped gill seal can cause severe problems if it dries out. They have two opposable 'thumbs' on each forepaw, which are more hooks than thumbs, used for gripping and climbing. They also have marsupial like pouches on the upper body of both males and females, but only carry the young for the first six months or so in them. Like the Jilaic, the mammaries are located in the pouch and do not grow large.

They are usually solid, earthy colors (mostly light tan), with a tendency to decorate themselves a lot - dyeing their hair and fur and marking themselves with paint, beads, and feathers. The ears are typically black on their backs. They typically do not have any hereditary designating marks on their bodies other than the occasional white patterns (white stripes and spots, white paws, feet, or tail tufts...). Some males sport a mane of sorts. Variations do occur depending on location; one colony might have dark red ears, white paws and muzzles in the next.

Males typically have several females in their family. They bear two to three kits at a time, with the duties of raising the kits shared among the females.

They are omnivorous, but primarily carnivorous, with an especial fondness for eating Jiliac (especially the fat and stupid ones), and horse meat. (Both the four-footed and two-footed varieties.) When Jiliac are not available, they are proficient fishers (although prefer red meat to fish.) They are intelligent, and use stalking and pouncing as their preferred hunting method. Males and females hunt cooperatively, although typically it's the larger male which strikes the final blow or takes the most dangerous position when strength is required (while the female often baits aggressive prey when speed is required.)

They prefer to live in rocky terrain with lots of trees and nearby water, avoiding deserts, open grasslands, or other areas without concealment. They are primarily found in warmer regions and migrate with the temperatures, although some varieties are more insulated and tolerate the cold better than others. They generally dislike technology, and shun things associated with 'two-leggers', but are not far from throwing stone spears.

A few Rifier can be found on Rillora, most of which are descended from those captured as slaves by the Fox. The enslaved Rifier generally did not survive well; some could not adapt to new climates, some due to not being around water enough for their amphibious nature, most of the rest due to disease.

The following 2 pages are in this category, out of 2 total.