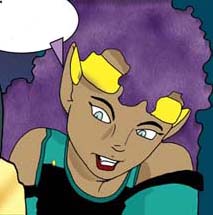 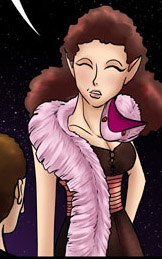 Claudia, a female Kourwine, is another of the beings that Lexx had encountered on an earlier game and for similar reasons to Damian. She absolutely loves him and would like nothing better than to have him all to herself. At 32, she's still a child among her people, who are very long lived and a lot more .. stoic.

She's rather touchy-feely, but also invasive since her hands tend to wander. Lexx has a hard time fending off her advances, even though his Dice usually help him get out of those situations (though not always in a good way, such as when a Level 6 Zeta lifted his leg on the hem of Lexx's coat). (AD Day 5, strip 14) She had a bad habit of tracking him down every day during his previous set, (she probably had a tracking system set up to notify her wherever he went and whenever he left the ship.) He agreed to visit her ship only in the hopes she wouldn't do so again this time. (AD Day 5, strip 18)

She's 7'3" with long wavy hair, although the color of her skin and hair varies due to her Kourwine abilities.

She developed an instant dislike of Chel when she first saw her with Lexx, seeing her as a potential rival for his affection. (AD Day 5, strip 15) It didn't improve her feelings towards Chel when Lexx tried to stop her amorous attention towards him by claiming Chel was his wife. (AD Day 5, strip 30)

She enjoys throwing lavish parties, and was planning one as soon as she came to Earth. (AD Day 5, strip 27)

Claudia tended to swing from player to player as they interested her. She had a reputation for chasing other players and that was her favorite past time, after playing the game of Alien Dice itself. Not that she had ever succeeded in catching any of the other players. Most of the rumors were that she was a flirt and that was it. (AD Day 5, strip 28)

She was plotting with Damian once she met him, figuring out a way to get Lexx. (AD Day 7, strip 23) She has never left Lexx alone since she read his digital album (AD Day 1, strip 43) - and she enjoys the pursuit, so his constant escape attempts make it even more fun for her. She's also been busy with her party so hasn't actually been down to the planet to capture her Dice, so only has Illo so far.

She knows about Lexx's situation, but she doesn't quite 'get' just how serious it is. In her case, she gets everything she wants and her servants are well paid and never mistreated. She doesn't quite get the concept of what the game is. Kind of like a debutant who plays a game just to get the attention of guys. Her contact with indentured players has been limited to Lexx and two others who have since been captured and forbidden to speak to anyone without permission. (AD Day 14, strip 28)

The one thing she can be threatened with is telling her father about her behavior, especially since she embarrassed her family before by throwing a fit on the ship of an indentured player. (AD Day 9, strip 52)

Although she doesn't seem to get that Lexx isn't interested in her, she has at least figured out that the stringini doesn't appeal to him for some reason, so doesn't dress as skimpily as she could. (AD Day 20, strip 120)

She would later change her mind about just being friends with Lexx, and want to actively pursue him again, accusing Damian of making moves without her, annoying him. When he points out that Lexx is more interested in Chel, she dismisses Chel as a 'silly little human girl' while she has money and 'a body that won't quit'. (Or at least a mouth going nonstop according to Damian.) (AD Day 21, strip 20) Damian tells her he won't help her interfere in Lexx's relationship with Chel, since Sairah take their relationships seriously. Claudia claims she wants to marry Lexx, Damian points out he has to want to marry her in return for it to work, and she begins plotting how to get Chel out of the way. (AD Day 21, strip 21)

None of her Dice are really anything more than for show. They don't do a lot of fighting, nor do they really care about it other than to put on a show. They're not at all like Damian or Lexx's Dice. They know it's not the same game, so they also very rarely get hurt.

After meeting Victor Reid, she has the idea of persuading 'daddy' to take Chel home, so she can have Lexx to herself. (AD Day 23, strip 62)