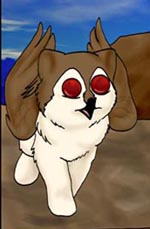 Drift can't fly - only goes where the wind takes him... drifting. Due to this lack of flying, or other useful ability, Lexx usually has him be one of the first dice he keeps in dice form when space gets tight. (AD Day 11, strip 19) Drift however has the ability to fly, but Drift just doesn't want to fly because he's never gotten to the point of being big enough (or leveled up enough) TO fly. His last bonding was to an owl, but a very young barn owl that hadn't really done more flying than jumping from limb to limb of a tree. He has a fear of falling (AD Day 18, strip 18) and heights. (AD Day 18, strip 28) Because of this, when Sythe and Skri saw him in the air trying to get their attention when Chel had been captured to force Lexx to fight Desirea, they were shocked and knew the situation was serious enough to delay their battle. (AD Day 18, strip 36)

His level one form is tiny compared to his base form. [1]

He's a heavy sleeper. (AD Day 11, strip 7) He also has lots of courage, but no fighting ability. (AD Day 11, strip 10) He's eager to please, and apparently very good at playing DDR. He likes to use his wings while playing to move more quickly and precisely, and without noticing, he also flutters in the air for a few seconds at a time. (AD Day 16, strip 2) 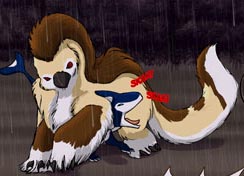 When upset, he tends to revert to dice form to sulk.

He was really afraid of getting on Lexx's bad side. He also has a habit of following Fly's lead. (AD Day 15, strip 20)

He's unsure about eating new things, even if they smell good, especially if they're not meaty, because some things upset his stomach. (AD Day 15, strip 31)

Drift is a very neglected dice. The other dice ignore him and he's VERY shy and quiet. You'll notice he doesn't say much, so the fact that Chel pets him and picks him up and gives him attention has made him immediately like her.

At level one he's a gryphon-style barn owl with downy hair like feathers, (AD Day 18, strip 18) though Syke has stated he may look very different when leveled.

His level one form is tiny compared to his base form, which came from the same planet as Stealth's (though a different species). (AD Day 11, strip 8)

At level 2 he becomes considerably larger, out-sizing a higher level Epsy, but he doesn't outweigh her. His body was mostly fur covering a streamlined frame meant more for speed in a dry environment than fighting in a wet one. This form resembles his original base, and during his third set was the first time he had ever leveled up, despite how hard he had trained. (AD Day 21, strip 181) Drift is mostly feathers and birdy built. Honeycombed bones and stringy muscles. In short... not intended for direct combat with an opponent.