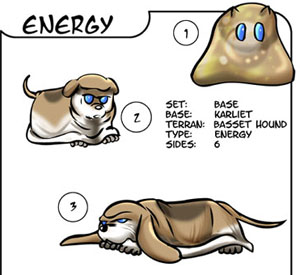 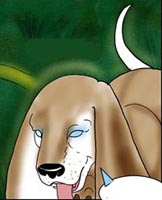 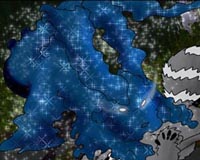 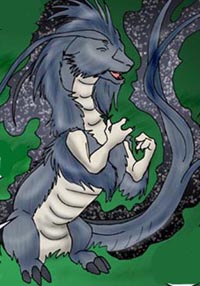 Energy was special. He was one of several Dice that Lexx had selected whose ancestors originated on Earth. There were several species. Lexx had chosen a pair from each of the species. They had come from his home world and while he had always wanted to visit it, was never sure if he would be able to. The choosing of these particular Dice was simply to have something that was also misplaced from Earth. (AD Day 17, strip 26)

He has fast reflexes, though not quite as fast as those of an actual Speed Dice. (AD Day 15, strip 5)

When rolling into level 5, his body pretty much disintegrates into nothing but light and energy, retaining a few features from being a dog that rapidly alter. (AD Day 15, strip 6)

He's good for someone to speak to... he listens and doesn't offer unwanted advice. (AD Day 17, strip 25)

He was enthusiastic when leveled up fully. He greatly dislikes the short and fat basset he had become, as well as being intangible. His displeasure was so great he became severely depressed. Energy never complains - but when depressed he becomes very un-talkative, and the lack of any conversation whatsoever is a good tip-off for how he's feeling. (AD Day 17, strip 26)

His current side forms go from a blob at level 1, to a very baggy basset puppy at 2, a somewhat baggy basset hound at 3, an almost normal basset hound at side 4, a sparkling blue intangible dog-like cloud at 5, to a fluffy eastern dragon at 6. In all forms he has blue pupil-less eyes.

He's hesitant around Claudia. "Energy felt like he wanted to melt into the water. He had seen what happened to Lexx when Claudia spoke in that way and those words were directed at him. He hoped she wasn’t going to try to hug him or anything." (AD Day 20, strip 117)

Energy has a habit of thinking too much. He wasn't the most vocal of the dice, but he did think and mull over things even more than Stealth. One of the things he's been considering is what will happen to all of Lexx's Dice once he no longer needs them anymore, since he is not rich and there are many of them. (AD day 20, strip 138) Though he loves Lexx, he fears they may end up having no choice but to fend for themselves, and is depressing himself with worries about the future - and annoying Stealth by sharing his worries with her. It didn't matter how big and powerful he might be, he liked nothing more than being near the other Dice and being social. The occasional battle was a small price to pay right now, but having to fight for his food and life were not things he was looking forward too. (AD day 20, strip 139)

He has plans that if something bad happens, he will run and not be caught again, for he doesn't want to continue fighting. (AD Day 20, strip 140)

Has been considering having Chel give him a new name in the hopes that when Lexx wins, she'll be willing to keep him as her own, since it is unlikely that Lexx will be financially able to care for them all indefinitely. (AD day 20, strip 141) Stealth is strongly opposed to this idea, not wanting to share her human. (AD Day 20, strip 141) He would ask her for a new/real name in AD Day 21, strip 192.

Lexx had never before seen him snap at any of the other Dice. Energy was the most obedient dice he had. Energy did everything that was asked of him without question. He was a calming force on the ship. (AD Day 20, strip 146)

Fly wasn’t the brightest of Dice, but he was a good friend to Sirius. Unlike Stealth. Stealth had her moments, but she had very low tolerance for those who got in her way. (AD Day 21, strip 212)(AD Day 22, strip 63)

When Lexx had asked all his Dice to battle him so he could roll up faster, Energy was the only one who didn't hold back. He was severely injured and didn't let on how badly he was injured. (AD Day 23, strip 88) There was a glitch in one of the healing patches that was applied to him. The nanos stopped functioning after an hour's work and he broke the holding stitches in several places. He lost a lot of blood, but they got to him in time to save him from fully reverting, or dying. (AD Day 23, strip 109)