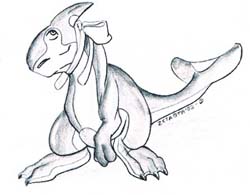 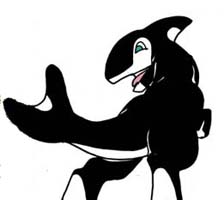 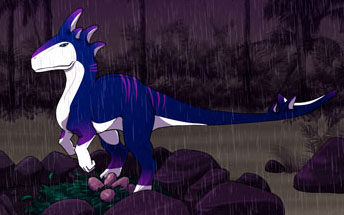 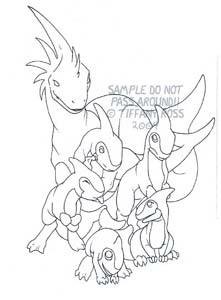 Epsilon, or 'Epsy', was one of two runt Sallomandyrs slated to be used as pit bait when Lexx selected her for use as one of his base Dice. She's extremely friendly and affectionate, but has the bad habit of eating anything and everything (though with no ill effect).

In her level 4 incarnation she maintains the Orca markings while she levels up, however the coloration changes slightly. At level 4 she was black and white, at level 5 it's more of a navy coloration.

At level 6 she still has the Orca markings, but has a row of fins on her head instead of one, purple ankles, wrists, stripes, and highlights.

She is very friendly and affectionate, and let herself be captured. (AD Day 7, strip 9)

She was pleased to see Chel with Lexx, as there aren't very many female Dice in his collection for her to talk to. (AD Day 7, strip 12)

She is chubby, and though can move well on land, she has a build and affinity that prefers being in the water over on land. (AD Day 7, strip 13)

The easiest way to control her is through her stomach, regardless of size. (AD Day 10, strip 39)

She is especially fond of Zeta, and managed to trick him into fathering a clutch for her (under the guise of 'playing'). (AD Day 12, strip 8)(AD Day 12, strip 26) Afterwards she became more aggressive, as well as hungry; challenging, then taking Zeta's food in addition to her own. (AD Day 14, strip 1) She has become very moody while gravid, and has caused minor damage around the ship, such as tearing up pillows, cushions, and blankets while nesting. (AD Day 15, strip 29) She has become psycho and unpredictable - one minute she's normal, the next she's all snappy. She tried to bite off Dash's nose because she didn't like his rhyme. When she falls asleep in the only exit out of the biosphere, the rest of the Dice will wait for her to move rather than confront her or try jumping over her. (AD Day 17, strip 6) She especially doesn't want to hear any comment about eating eggs. (AD Day 19, strip 3)

Even in the more out of the way areas of the biosphere, she was feeling heavy and cumbersome. It wasn't doing much for her moods and desire to nest. The biosphere just wasn't the right place to lay eggs. It was too crowded. She needed more space and instinct was making her more and more restless. (AD Day 19, strip 6)

Stealth is angry about the ordeal, seeing all the problems that surround a Dice being pregnant when its still being used in the game and not being bred... (AD Day 20, strip 93)

Eventually Lexx will have to notice (Chel's already noticed her getting fatter (AD Day 18, strip 109))- it's just a matter of when. Stealth ended up spilling the beans when she laid her eggs, (AD Day 21, strip 171) at which point Lexx resolved to destroy her eggs, for while she had them she'd be feral and not listen to him - and he needed her. (AD Day 21, strip 173) This point was proven when she attacked Lexx/Energy on sight when he approached her nest. (AD Day 21, strip 177)

She retains some loyalty to Lexx while the eggs are present, but her maternal instincts override and suppress her normal nature, leading her to view him as an enemy when he poses a threat to her eggs. (AD Day 21, strip 176) She had never disobeyed Lexx before this time. (AD Day 21, strip 182)

She has a young, light, bubbly cheerful female voice.