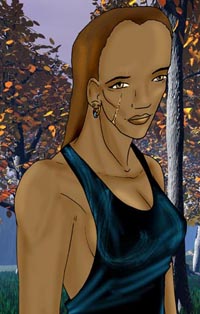 Name
Evionne
Species
Human
Appearance
African-American. Her hair is straightened, highlighted with light brown, and brushed back. Bears a scar on the right side of her face, courtesy of Silver. Light brown eyes.
Occupation
Hunter for the AMIB (in No Angel)

As Ballistic and Silver are rescuing Jules, Evionne confronts them (No Angel, strip 307)(she bears a huge grudge against Silver over that scar (No Angel, strip 308)). Silver runs off with Evionne in hot pursuit, who then ends up capturing one of the Koyoti she stumbled across instead, (No Angel, strip 313) possibly believing it to be Silver.