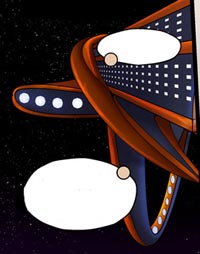 Although his ship isn't quite as big as Claudia's Ship, it's more secure. (AD Day 7, strip 16)

The ship has high domed ceilings that allow a view of the stars, but are also one-way so while you can see out, no one outside can see in. (AD Day 21, strip 49)

His ship is equipped with a high quality Door that has neither light nor sound when opened.

He also has a small, two-person ship, mostly used to go down to a planet's surface from a much larger orbiting shuttle, like the Gold Moon, with a sigil painted on the bottom of it in crimson against a black background. It was an identifying crest and unmistakable. (AD, Day 4, strip 11) Damian uses this when going down to the surface sometimes instead of the Door.

The floor Keith Ritter and Victor Reid was on had a room for each of them, a private dining room, a room for Lexx, and two more for his Dice. Though the elevator wouldn't operate for them, if they needed to they could get anywhere on the ship through the garden lookout, as well as a lift that went to other floors in there that Fly knew the codes to, but recommended they not use as it was easy to get lost in a large ship. In the garden lookout, Dice were scattered throughout the large area, sleeping soundly. A stone path wound through the long, narrow strip of greenery. At its widest point it was about twenty- five feet across and fifty feet long. On the side Keith had entered from, there were windows and several doors. One of the doors went to Lexx’s quarters, the other, the Dice. The opposite wall opened out into the larger garden area. Keith took a quick look over the edge, noting that they were up almost above the tree tops and there were some huge trees in that garden. They had to be at least 50 to 60 feet tall with huge, thick trunks. Strange bird like creatures sang in the tree tops and Keith witnessed another creature pop out of the top of one tree and nab one of the colorful creatures and eat it in one bite. There was also an area that had been blocked off for more privacy. A wall blocked any view of the larger garden and a hedge was behind him now. In front of him was nothing. A huge window looked out onto space, so crystal clear that only the metal supports that divided it into sections and light reflecting off of it betrayed its existence.(AD Day 23, strip 98)

Seldom used hallways power down the lights when unoccupied. One going down them will be in light, as the lights come on in each section as you enter them, fading behind you as you leave. (AD Day 25, strip 1)