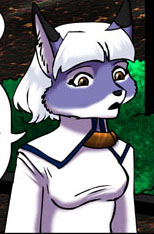 Roleplaying experience: Minor exposure previous to this. The RPG here is my first direct experience.

Personality: Noiya is very sociable and friendly, an active helper whenever she gets a chance, and almost always calm. She is a natural and effective leader, but adaptable and prefers to let others lead. She possesses a powerful intuition where the motive of others is concerned.

Likes: Noiya enjoys interacting with other people, whether it is simply chatting idly, working on a project, or some form of physical recreation. Her favorite topic are local events, or larger events which affect daily life. She also enjoys helping out students who come to her, and will offer to befriend anyone who seems to need help adapting. Dislikes: Noiya has little patience for insincere people and pranks, and isn't fond of social missteps.

Strong Points: Noiya is a natural and effective leader and organizer when the need arises, and tends to remain calm and composed. Her leadership style is very deliberate, but adaptable. She also has the ability to empathize with others, making her a good candidate for others to turn to. She also speaks Cyanzian, Khaasi, and some English. She's also a good cook.

Weak Points: Noiya possesses no technical skills or expertise, which means she must rely upon others if such is needed.

Name one thing your character would never do and why. Noiya would never lose her temper, because she knows when you lose your temper, you lose your ability to approach the situation rationally. Noiya would also never turn down a request for help without good reason. After all, her chosen role is to help where she can, in the manner in which she can help the most.

How does she interact with others? Noiya actively keeps track of her circle of friends. She is, however, always on the lookout for others to get to know. Noiya's demeanor is friendly, helpful, and relatively informal, and she generally attempts to find out about the person first. She enjoys learning more about the person's past and their interests, and willing to talk about most anything, although she prefers local events, and can't really say much about topics of a technical nature.

Noiya and Taisha genuinely love each other and will sometimes take some time to enjoy each other's company. They generally work together in all things and fights are rare. Noiya allows Taisha final say in all decision matters, but is willing to give her advice (which Taisha generally acknowledges and accepts.)

Noiya is also a fairly stern disciplinarian, and essentially runs the daily household operations. While Taisha is usually the one who makes any final decisions which affect the whole family, she does advise him, and can make any urgent decisions that he may not be there to make. Noiya is generally the one Ruti talks to if he needs some comforting or advice from an adult that doesn't involve the possibility of punishment.

She uses Ruti's full name and the Khaasi tongue in order to chastise Ruti and stop any protest he may raise.

Skills, Hobbies, Etc Noiya was a secretary for 10 years, and keeps excellent notes and records. She is also a keen and intuitive listener and makes a good counseller and comforter. Her deliberate manner and matter of fact approach make her a natural organizer as well. She is a good cook, and often trades recipes in order to expand her knowledge.

Physical Appearance Noiya is a blue fox with styled white hair, and emerald eyes, 4'10" with moderate but healthy build. She prefers simple but decorative clothing, usually a pretty shirt and matching slacks or medium to long length skirt.

Why is she here at Mars Academy? Noiya is here to support her husband in his staff position at the academy, and to raise their son.

What are her qualifications? Her husband, Taisha Fidael, has a passing knowledge of the sciences, as well as the technical skills needed to provide support in keeping the lab facilities up to date and running well. His work ethic and attention to detail is impeccable. Noiya is responsible for running daily household operations and keeping track of such things as finances.

What traits do they have that are useful to the future colony? Noiya is a natural organizer and counsellor, although her efforts in this area are entirely volunteer.

What are their goals in being here? Noiya's primary goal is to raise her son to be an upstanding member of society. Aside from that, Noiya wishes to help others in whatever manner she can, particularly enjoys helping others to adjust to a different society. Noiya is interested in learning of other cultures as well.

She has recently began to desire having another child as well.

What is your characters nature and thoughts on others of his/her species? Noiya has a special place in her heart for the young foxes at the academy, and enjoys talking with them (particular those who only speak Khaasi). She doesn't think so highly of the Fox culture she came out of.

What is his or her view on other species? Noiya is fond of the Wolf culture and thinks highly of wolves in general. She is curious about the culture of various other species, and enjoys hearing about them. She tends to be open-minded of any other culture until given reason not to. After all, she knows what it is like to be shunned simply for your race.

Noiya K'lim was an only daughter of two blue foxes. She quickly showed an aptitude for keeping track of information and was employed as a secretary for a local office, a job she enjoyed. 16 years ago she met a scientist by the name of Taisha while out with friends. He seemed different from most foxes, and after a period of a year, they began courting. A year later they were married.

She discovered she was pregnant 2 years after that, and Taisha seemed to be worried when he heard the news. It turns out that Taisha was happy to have a child to raise, but worried owing to the fact his beliefs might endanger his new child. Her husband, who tended not to make rash moves, decided to take a big risk and move out to other lands. Noiya herself was worried about the move, and advised against it, but was willing to go with her husband.

The relocation was made with the aid of friends with no incident, shortly before the Fox Plague hit.

Arriving in Centralis, the couple found themselves amongst those who did not trust Fox. However, they were able to survive off the combination of social services of the Wolf government, and the various odd jobs Taisha was able to perform. In the meanwhile, Noiya was able to get to know the neighbors, and the initial distrust turned to friendships, especially after Noiya was able to pick up at least some Cyanzian.

Eventually Taisha was able to get a position as a lab tech in Avistary Academy, when a representative of the academy took notice of his keen attention to detail. With this position came a form of financial freedom, and new friends. Noiya was able to master Cyanzian while at the academy and began helping her husband pick it up as well. She raised Ruti in a combination of both languages, using Khaasi at home, and using Cyanzian when out in public.

Taisha was selected for a labtech position at a new facility over near Earth, with a recommendation by his supervisor, and so the family made the move to Mars Academy.

If you're applying for a character that's been at the academy a while, what's happened to them at the academy? How have they spent their time here? For the last year or so, Noiya has been raising Ruti, getting to know the neighbors, and helping out where she can. She's also trying to learn English, so she can talk with the humans who haven't yet learned Cyanzian (or Khaasi).