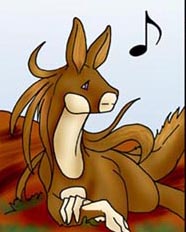 Rook is a troublesome Dice, much like Mischief. Rook's original form came from a very arid world, and the part of Australia she was in felt much like it. Her kangaroo form was even much like her base form. Her kind sing in melodic birdlike twittering and humming, and she likes to occasionally do so. She makes no effort to hide herself from Lexx, liking the challenge as a sort of entertainment. (AD Day 14, strip 5) She's up for a good fight - and especially likes a quick win, then hopping off while laughing at Lexx. (AD Day 14, strip 6) If she's in a position where she can't win, she prefers to run away, (AD Day 14, strip 7) though she never puts up much of a fight. (AD Day 14, strip 9)

Lexx had to go after her twice to catch her, since Steel's refusal to even flinch under Rook's attack made her run away the first time.

Her main priority seems to be to do whichever is most fun for her.

She has a fondness for wine, although she doesn't know when to stop. When drunk she seems to develop an obsession with treats. (AD Day 14, strip 17)

Sibling of Fluffy - she apparently feels a lot of affection towards her. Her trilling also seems to have the ability to interfere with Fluffy's telepathy. (AD Day 20, strip 13)