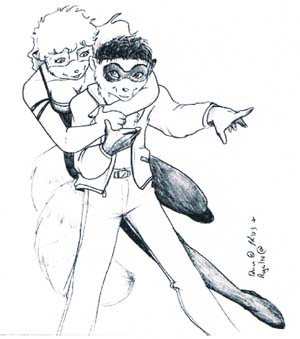 Name
Ryalto
Species
Sirac
Occupation
Mars Academy Guard (in Roomies)/ student in the RPG
Fur Colour
Hands and feet half way up to knees, black; arms and rest of legs, grey; ears, grey with one (left) tipped black; face, grey except for bridged mask around eyes only that is black; hair on head, dark brown almost black (short, less than an inch longer than his fur); tail, striped grey and black, base stripe is black and tip is black (the tip fur covers last four inches), five grey stripes, all stripes equal width

Full Name
Ryalto 'Redshirt' Trebor
Species
Sirac
Age
in the Earth Year 2000: chrono age is 11, bio age is 19
Type
Student
Function
Physics/Programming Student
Division
Student
Quotes
"Explosions are FUN!", "Audio/Visual input bus in use. Please attempt to contact me later, like when I'm not working."
How much experience do you have with role-playing? How much time have you spent on MUSHs/MUXs/etc?
None. This is my first time, please go easy on me.

What is your character's personality? What things does s/he like? Dislike? What are the strong points of your character?
He is friendly, shy, not out-going, mature towards most subjects, not afraid to talk about something awkward for most (read as taboo subjects like reproduction, death but is awkward about other subjects like his past) and is a bit lazy (read as does most work on time, unless something more interesting or important comes up, and hardly ever cleans own room. When he does, he expects it to stay that way for at least a week). He does not like being alone, but also hates being the center of attention. Unless he's on a network of some sort, then he's a bit out-going, but still keeps his identity secret. He likes the colour red, and also likes hoverbikes. He hates water (its a phobia that is justly kept - see Masks of Fate) and ignorance. He tries to help out when he can, but is kind of inept at dealing with some people. He also is afraid of rejection, so is not likely to ask any females out on a date.

He's me if I had been born a Sirac, except I prefer blue and my phobia is heights, not water. Strong points? Well, he is intelligent, but he has trouble articulating his thoughts/knowledge to others. He is also very logical in his thought process, even though it might not seem so at the time. I can give you a stream of what he/I was thinking when he/I post anything, provided it was within 48 hours (maybe more, but don't hold your breath). Has a tendency to act more irrationally when tired, and may appear to be high on something if really tired (could also be magic mushrooms ).

Name one thing your character would never do and why. How does s/he interact with others?

He would never knowingly torment mentally or emotionally another sentient. He knows what that feels like and would not wish it upon anyone. He would play practical jokes, however, as long as they wouldn't be too traumatic to the victim. He reacts nicely and civilly as long as they are civil to him. As soon as they stop, he stops and he has the capacity to be VERY rude if he wants to be. He also will not hesitate to tell someone if he feels they are out of line. Oh, not likely to glomp anyone, but might glomp something cuddly or snuggle-y.

What are their abilities, hobbies, things they're good at? MENTION if they carry some sort of weapon. It's not uncommon for a Cyantian to have some sort of weapon, usually not high powered ones though and most likely for ornamentation. They also have to have permission to carry them. No guns. They make Rayne fidgety.
He is a Sirac, so has some psy skills: latent tight mental shield, latent augmented strength, latent phase ability. Latent as in he has absolutely no control over them, so he is liable to phase through walls if leaning against them, or break doors off hinges if slamming them. The mental shield makes it so that he can't do that Sirac Mind Talking thingy, and he ain't no telepath/empath, should also protect him from anyone trying to mess with his head telepathically. The augmented strength thing multiplies his normal lifting ability about 2-3x (sometimes more) but leaves him physically wasted afterwards. The higher the multiplier, the more wasted, and anything above 4x will knock him unconscious after a few seconds. It can take anywhere from 30 minutes to several hours for him to recover back to normal. They tend only to appear when he's in emotional or hormonal turmoil. Since he's a level headed guy, they shouldn't appear much at all (read as only if the ability will add comic effect or is necessary, and I will consult anyone in that thread before using them).

He has a knack for explosions, hence the first quote. If you want some fireworks, he could probably rig something up, but don't be surprised if it destroys something. He has a fox combat knife w/ sheath, kept in his room in a locked steel box, doesn't take it out unless he might need it practically (e.g. camping, going to Earth, making explosives) so he should have permission. Also, he does have four Red Alert CD's, but doesn't know what they are yet, he keeps them in the box with the knife (protected of course!).

Give an example description of your character
Uh, go read Masks of Fate or Waking Dreams. Either of them gives an idea of Ryalto's character in action.
Physical characteristics

Why is it essential that your character be here in the Mars Academy? What are their qualifications? Traits useful to the future colony? Recruiting class? Goals in being here?

Essential?: No, but might be useful if they need an amateur miner (he could make his own TNT ) He knows a lot of Physics (just over High school level earth equivalent) and is learning to program in two languages, one Cyantian and one Terran (either Delphi/Pascal or Visual Basic, haven't decided which yet) Not sure what Recruiting class means... Goals are to get and education and then get a job, hopefully one that pays well. Where he does not care, as long as he doesn't have to fear for his life. Would be an excellent candidate for exchange student to Earth after open contact is established and if any of the Universities their wanted to have him.

What is your characters nature and thoughts on others of his species?
He is paranoid around his species. He isn't prejudiced against them, he just doesn't trust them not to read his thoughts and use them against him. Has to do with a bad experience when he was young (see Masks Of Fate). Of course, he is more open towards the females of his species (expect him to silently worship Muerte/Quinn if he runs into her).

What is his view on other species?
He tries not to be prejudiced towards any species, but then he ain't stupid. He will take what he has heard about other species and act cautiously around them until he knows that particular being. He is particularly cautious around fox (more so around golds) since he is an EG creation. He is most comfortable around Wolves, and is slightly nervous around any of the Cyantian Mice (they remind him of Hedtra and Lask - see Masks of Fate chp. 5 and Mind Games. And you should read this as a down-play. He is easily spooked by anything rodent like, including Rats, as Adara and Kerif found out). He has no memory of skunks when at EG, but has heard rumours about them, and will find them interesting (specially as Hedtra spouted off bio facts about all sorts of Terran creatures to him).

Special Notes
His growth was not that of a normal Sirac or a normal human. He started life growing at the expected accelerated growth rate of a Sirac, but when his biological age hit 10, he started to slow down. At the biological age of 12, it had slowed down to the normal rate expected of a human or wolf. Hence he is 11 years old, yet has the appearance of a 19 year old.

Also, he is sort of a prototype of a new breed of Sirac (see Twisted Hope)

As for adoptive family, and friend for that matter, he sees that as more important. After all, you choose and are chosen by friends. Better cherish them.