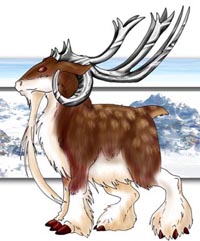 Steel never cooperates fully: (AD Day 14, strip 8) he's conniving, up to no good, manipulative, stubborn, arrogant, pushy, and quickly resorts to violence when upset or frightened. He will stand up to Dice 10 times his size without second thought.

He has a problem with the cold - it makes him lock up. He will slow down and freeze if he's not careful. (Which made him at level 6 outmatched by a level 4 Zeta once Epsy used Icewind against him) (AD Day 9, strip 68)

When used as a decoy against Rook, he remained completely immovable, refusing to sway in even the slightest to fool Rook into thinking she stood a chance against him (AD Day 14, strip 6) - and so she quickly gave up and ran away before Zeta could capture her.

His base species was a deer like critter with seasonal antlers, thus the antlers in his current form.