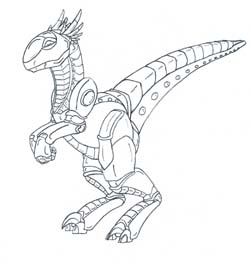 Technofamiliars are like little robot power plants. Syke hasn't fully decided on what kind of power they use, but they are self-recharging and do have limits on their power to do things and need to rest if overused. Techno familiars provide their power to the techno-mages. Technofamiliars are created by gradually cyber augmenting a mage's companion creature, until it is essentially all robot - when the familiar dies it is by an as yet undisclosed means transfered to the robotic frames like those seen in Campus Safari. This process transfers the basic personality of the companion, but tends to do irreparable harm to truly sentient personalities. (They can become hostile, unstable, and violent). Familiars have a fail safe protecting the powerful energy core, such that it can shift a damaged or unstable core into pocket space, to prevent danger to it's master.

You have to train your familiar first off, before it even BECOMES one. They also have genetically altered lifespans, otherwise, you'd be very old by the time they die. Most of them don't live past the ages of 5 to 7 years, which gives you plenty of time to learn your craft, but you can do minimal damage all by yourself, the familiar is just an enhancer/energy source for bigger things.

The best familiars are the limited class, the small ones, preferably with wings for easy transportation and so they can get from place to place on their own easily. They're also easier to hide. Any kind of bird, miniature gryphon variation *and there are a lot of them* and generic whips. The most common is the whip, which is the smallest. These are easier to control and most technomages will have a small familiar. The extreme class contains things like Shivae, horses, larger gryphons and animals that have undergone the familiar process. They can contain larger power sources and are therefore MUCH more powerful, but they also contain more sentience than the smaller forms, which are usually not more than loyal pets mentally. They also live longer, are harder to train for the purpose of being a familiar, and they're harder to control if forced into the process *and most are. *

Larger and more sentient Creatures could under go the technofamiliar process, but no individual who was sane and aware of what the process involves would ever undergo the process except under extreme duress or out of some truly desperate need. It is almost guaranteed that the individual would not come out of the process sane. They would give up everything, all the benefits of living and it'd be better for them to be dead than a familiar. Erasing memories can't be done, because they still have a real biological brain running everything. A sentient Techno Familiar who understands Techno magic, can use it's own power to cast spells. As a result, any such familiar would have the power to turn on its creator. Not even the Fox would risk this procedure on anyone.

The difficulty of getting a familiar depends on the quality you want. A familiar can live for several generations if it's kept in good condition. Technomages have to have a strong grasp of technical aspects to maintain their familiars. They have to know how to repair them, keep them clean and not overuse their powers. Like with an ordinary magic user, some spells can't be used over and over again, attacks of different power levels can't be used repeatedly. The familiar needs to recover between powerful attacks and you might not want to overuse a fireball like attack while being a hundred feet in the air. The biggest drawback to a familiar is that it has to be GROWN and develop an attachment to its master in the first place. There's a lot of stress involved in the transfer process and it can really screw things up if the to-be-familiar is afraid or upset. It carries over into the mental workings of it's finished form, making them hard to handle. Usually, you must wait until the familiar is old or near death to transfer for a good one. This is why everyone doesn't have one. It's hard to catch them with enough time and at just the right point. *Tira's familiar, belonged to her mother, so she was also synched to it when the uprising occurred. There's a story behind all of that as well which focuses on the familiar and its relationship with the Fox. *

It is illegal to create a technofamiliar out of a sentient creature, If someone found out a familiar is sentient, then they would ask the familiar what happened to him and who's responsible. Lots of things are taken into account. Whoever was responsible would be punished, preferably in a way that would preclude their ever doing so again. If the technomage had demanded it be done, then he'd be punished for it, but still keep the familiar. It's really not that EASY to separate a technofamiliar from its technomage once it is was created. The Technofamiliar is imprinted TO the technomage so they will always share a link. Taking the familiar away from its technomage would also require you to find someone to care for it, otherwise it would die. And in any case, a sentient Technofamiliar has many ways of taking its own revenge.

In the case where a technomage accidentally winds up with a sentient familiar, the technomage should report its familiar's intelligent status so that the person who created the familiar can be tracked down and punished. However, it is not really expected as doing so can create all sorts of hassles and will not really change the situation for the mage and familiar. Non-sentient Technofamiliars gain a certain degree of sentience in the transformation process. They can use their powers on their own whim, hold back if they choose, etc, but they usually will not act alone unless they have to. Depending on how they were treated in life, they could be extremely loyal or dangerously rebellious and the rebellious ones cause problems. There are a LOT of facets to familiars and how they work. Raise a bad one, it could kill you if it learns it has that power, or it will run away because it knows it can, or it'll serve out of fear. It's best to have one that was treated well in life.

More recently the fox have also developed 'shortspan' familiars, whose lifespan has been shortened to 2 to 5 years. They've also been developed to be more natural looking to better blend in with their surroundings. They cover them with a 'skin' of sensors that reads directly into the familiar's 'brain', so they can be petted and enjoy it. They are also sentient when converted and will talk with you. They can't procreate, and lack the chemicals that create the desire for it. They are also able to 'eat' and process the food for their own uses, but fortunately, you don't need to clean up after them.

They are very intelligent (most of them are, not all). Some of the older ones are not nearly as good as the newer ones, but that goes without saying that the newer ones would be improved. Their bodies are also better, lighter. Just keep in mind that they can dent like tin foil since they're not meant for physical fighting.

If the familiar is destroyed, the sudden break in communication will often jolt the brain of the technomage enough to knock him/her unconscious. Severe injury to them can also cause great pain to the technomage. If a Technomage dies and leaves a familiar, it can be transferred to someone who was close to the Technomage, or on occasion, the familiar if it has no duties will just vanish into subspace.

This branch of technology was primarily researched and developed by the Fox prior to the death of the last White Fox King. Exotica Genoworks is noted to having had some part in the development of the Technofamiliars.

It is not a good idea to eat a familiar. For one thing, they're usually capable of casting forcefields and other such energy fields AROUND themselves for self defense. You would either break all your teeth or wind up with massive static cling.

Those little whips that young Chatin & Cilke have ARE familiar engineered whips. That's why... unfortunately, they haven't shown up in Campus Safari, due to having passed on years ago. If any of the whips that belonged to the C-group skunks had been turned into familiars, they would LIVE as familiars. Technically, they only become familiars when they die and then they have a device on that that immediately teleports them to a special lab to undergo the process before they completely pass on. It's a tricky and very delicate procedure.

The easiest way to get more familiar-bred familiars is by them having babies. *One of the technomage humans happens to fancy himself a whip breeder and wants a whole flock of them, so there are actually whips all over the place on one floor. The lead human is hiding them in his quarters. They're not SUPPOSED to be raising familiars. But ..he likes bending the rules and he's sneaky.* Previously, they have not had luck with making a familiar that can breed, so it'd be quite ... different, and probably more convenient, though you cannot breed them once they're turned into familiars, simply because... you can't. They're now 'machines'. They're also very smart, but you can't expect much past a 10 year old in common sense in some areas. The familiars WILL grow their full size, faster than they would in the wild.

Unless you're 'special' you can only understand your own familiar because they're on your 'frequency', while other familiars only if they WANT you to understand them.

All of the familiars handed out at Mars Academy were seized as frozen embryos on a Genworks ship that wandered into a restricted area in which all of their cargo was confiscated. Therefore, it had a few altered creatures on it.

GURP Write Up for Technofamiliars

Mini Whips are favored by those who desire a familiar who is very easy to conceal. An experienced technomage who knows how to make efficient use of the limited energy a miniwhip can hold can be quite frightening.

small plasma flamer built in, 3 shots, 9 minutes per a shot fired to recharge to full.

Mini Gryphons are much harder to conceal, and much heavier. The trade off is a larger energy pool, and a faster recharge rate. (provides 5 Fatigue, requires 2 days to fully recover.)

Small whips are the most common Techno familiar. their large energy pool makes them quite popular.

Shivae technofamiliars are rare, even ones made from domestic (non sentient) Shivae. They provide a LOT of power, but they tend to be far more fickle. They are also far more capable of taking revenge on mages who do not treat them well. (remember, they have access to that energy pool as well, and are far more likely to understand how to use it.

Very few people are actually foolish enough to make a dangerous predator like the Scythetail into a magic wielding menace to society. But knowing the fox, there is probably at least one of these running around. They are nearly impossible to control, make lousy companions, and are not nearly careful enough with those mono-molecular tail blades.

(Tail blade does 3d-1 Impaling or 4d-1 cutting, armor provides only 1/10th normal protection. An average roll will do enough damage to force an average human to roll vs HT or die.)