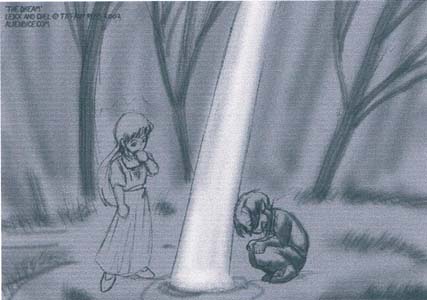 A field full of brightly colored flowers and butterflies surrounded her. Chel giggled and relived a memory from when she was a little girl. She'd played on her grandparent's farm, with it's gently rolling hills and abundance of farm animals to frolic with her. Right now,.. it was a trio of little white goat kids. She'd bottle fed them. She remembered,.. when she was only eleven or twelve.

Now she was running through the field to a huge oak tree with a twisted trunk. It had been split by lightning once, a long time ago as her grandfather had told them and had not been able to stand up straight since then, but it had lived and grew now bowed in the middle. From here, a tire swing hung, just low enough for a little girl to reach.

Still giggling, she grabbed onto the swing and felt it rock slightly. Her feet didn't touch the ground. That's right, … someone else had to push it. Chel frowned and looked around, then felt the swing move, swinging forward gently. She laughed and heard someone else laughing with her.

"Now,.. what are you doing here?" The voice inquired cheerfully, "You're just a little girl, aren't you? Why would a little girl be running around out here alone?"

Chel leaned forward in the swing, trying to see who was pushing her. She didn't have far to look. A mass of golden curls framing a narrow face smiled at her from the side of the swing. "I'm playing." Chel giggled, clinging to the side of the tire.

"Oh,.. you are now, aren't you?" Riley pushed the swing again, chuckling. "You wanta come play with me for awhile? We can fly! Would you like to fly, Silly little girl?"

"I'm not a stranger… I'm Riley." He stopped the swing and held out his hand to her. "Come along."

"Hmm…." Uncertainly, Chel reached out and took his hand. Everything changed. He caught her up and the fields abruptly gave way to darkness and ghostly shapes.

"I just want to show you something,…" Riley carried her, "Don't let go of me unless you want to go home, ok?" Riley had two seconds, but two seconds in a dreamworld could last an eternity, especially with Lexx napping and completely unaware, but any longer would be risking him realizing what was going on.

"What is this place?" Chel cringed in Riley's arms. It was creepy.

"This,… is Lexx." Riley smirked, whispering.

"This is a reflection of Lexx, who he is and how he feels. This is Lexx's subconscious." Riley explained touching down in a secluded area. He'd had to search for a place that Lexx didn't visit much and that was himself. The part that he kept locked down.

Chel blinked as Riley stepped onto firm ground and held her hand. The boy wasn't much more than 3 and he was sitting in the middle of what looked like a tiny, … dead garden. He was crying. "… oh,… I shouldn't be here." Chel whispered.

"What do I say?" Chel nervously looked at the little boy. She knew it was Lexx. There was no denying it. Even if he was a little boy in this dark dreary place. The odd thing was,… where he was sitting there was a tiny ray of light illuminating the ground in front of him. It was only the size of a quarter, but the ground where it hit was muddy and looked to have been upturned.

Riley nudged Chel, but didn't let go over her hand. "Go on."

"Hello, what's wrong?" Chel reached out with her free hand to touch Lexx on the shoulder. The little boy quickly rubbed the tears from his eyes and blinked up at her. It was odd to look at Lexx and see a boy with large sad eyes, mournful and way too old for his face.

"Mommy's garden is dead." He shrugged and stared down at the light. "There was no light and it died,.. now… there's light and I can't figure out how to get anything to grow. Mom just watered the ground and things grew,.. I can't make anything grow." Lexx pouted sadly.

Chel grinned, knowing exactly what was wrong, "Well,.. you can't grow anything without seeds." She giggled.

"Seeds?" Lexx looked mystified, like that was a foreign word.

"Uh-huh." Chel reached into her pocket, not even really thinking about where she'd gotten them and pulled out a handful of tiny seeds. She knelt and dropped them in the light. "Bury them, give them time and they'll grow."

"You have to bury things to make them grow?" It seemed to be a confusing concept to the little boy as he reached out and pushed one of the seeds down into the mud with a forefinger. The moment he pulled back, a green leaf sprouted from the dirt, growing in the light much to his glee.

Lexx reached for the rest of the seeds, covering them with dirt and watching in amazement as more sprouts appeared. "Thank you,… thank you…." He got to his feet and stepped back to admire the little bits of green. "When the light came I was so happy,… a week ago,.. I cried a day to make the ground wet,.. and then there was water running in the little pool,… I want to see my mother's garden again. Maybe she'll come home again if I can make her garden grow. I failed and she left,… thank you,…"

Riley hrmed, realizing it was time to go. He'd done what he meant to, opening the channel further without either of them realizing it. He let go of Chel's hand and she vanished abruptly, going back to her own dreams.

Lexx blinked at Riley curiously, who simply smiled, waved and vanished as well.

Chel found herself back in the swing, rocked gently by the wind, thinking even in her dream how strange it was,… she dreamed of beautiful things, fields and flowers, butterflies and birds,.. but for a moment, the dream had been cloudy. It was already fading.