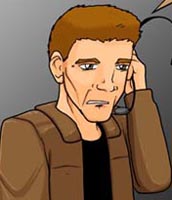 Victor, or Vic, Chel's father works for the same branch of the government (ERA) as his wife,.. which is how they met. They often work together on correlating teams due to their specialized work. (AD Day 11, strip 16) He's more of a 'detective' than a scientist.

He and his wife had agreed before they were even married that it would be best that their children never know what they did for a living. They never considered their children would take their jobs seriously in the first place. In the second, they were strictly forbidden from informing the general public of their existence and that included their own children. (AD Day 18, strip 90)

He's currently investigating several hundred reports of strange creatures appearing all over the world, and even stranger beings appearing and fighting them with more creatures. They include a giant golden eagle big enough to carry off a man in the Seattle area, a 'sea dragon' rubbing against cruise ships in the Gulf of Mexico (who also loves heads of lettuce and having its picture taken), and a unicorn kept in secret on a ranch in Montana (a buckskin filly with a foot long horn, who's very fast, won't let them catch her, and vanishes while whinnying arrogantly when cornered (as well as making rude comments), who seemed to like him enough to let Victor grab a few hairs from her mane). (AD Day 15, strip 15) He also has photos of some aliens... good pictures of Damian and Claudia from Hawaii, as well as poorer images of Riley, Mauki, and another with orange hair... one of the poor ones was of someone who acted with hostility at having his picture taken, and threw the man taking the picture into a car. They wanted to quickly mobilize to encounter an alien, and possibly capture one if they refused to speak or tried to leave. They could not allow aliens to freely roam the Earth, for if the conspiracy nuts caught wind of it, they would claim if one 'conspiracy' was real, all the rest were too, and they were not ready to deal with that. (AD Day 15, strip 16) He decided to approach Riley since he was in the same bar in a suburb of New York every night for the past two weeks, and was chatty with the other bar patrons. He wanted to handle it personally since it wasn't something he would trust to an overeager field investigator, and he might never get another chance to speak with an alien. (AD Day 15, strip 17)

He had the bartender contact him the moment Riley showed up, and spent twenty minutes observing him over the monitoring system the bar had installed before making contact. Outside there were two units of support watching the bar and listening in. The other man in the bar was another agent. People had left, but none were allowed to come back into the bar once they had, just in case things got out of hand. (AD Day 18, strip 68)

When he confronts Riley as being an alien, he identifies himself as being with the FBI. (AD Day 18, strip 73)

When they were outside, Victor mentioned wanting to run a few small tests on Riley, and then letting him go unharmed. Riley didn't believe him, broke the handcuffs, then mentioned he knew that his kids were Andrea, Chel, and Kalvin, living 300 miles away - he knew where. Victor took it as a threat. (AD Day 18, strip 74) As Riley ran away, he got shot by someone, (AD Day 18, strip 75) then tackled by Victor as he went through a Door to Damian's ship, (AD Day 18, strip 76) and ended up leaving his coat behind, so Victor at least got his blood sample. He then had to consider how harshly to chew out the overzealous shooter who was more concerned about Riley getting away than anything else,.. including accidentally shooting Victor. Shooting Riley had never really been in the plan. He hoped it wouldn't have any disastrous results. (AD Day 18, strip 77)

His group, disguised as TriCity Electricity, would later come in and secretly install cameras around the house while Chel, Kalvin, and Andrea were at the pool. (AD Day 20, strip 63)

He freaked out when his wife suggested that Chel might having feelings or Lexx and was trying to 'protect him'. (AD Day 20, strip 65) He does not approve of most of the young men who would want to date Chel, but especially feels an alien has no business being with his daughter. (AD Day 20, strip 66) He can't accept that and feels there's no way Chel could be in love with Lexx. (AD Day 20, strip 67)

He was not happy finding out that not only Chel, but also Kalvin, knew Riley. (AD Day 21, strip 5)

Melissa cautioned him Riley's threat may have been a mock threat to throw him off, thinking about it in terms of humans, not aliens. Mel knew well how her husband thought of 'aliens'. It was in his nature to be suspicious and on guard. It was also what kept him from getting a nice office job, not that he wanted such a job. The field was where he belonged and where he thrived, but this had been the first time they were faced with an actual contact and this was personal. The worst part about this entire situation was that there was a strong possibility that another unit would be sent. Mel knew this thought was what had Vic on guard the most, considering the danger another unit might put their daughter in. He wanted to be there and so did Mel. (AD Day 21, strip 12)

Melissa also pointed out that Victor injured Riley, but he made no real effort to hurt him back, even though he could have. He was minding his own business until Victor cornered him and most likely scared him, then figured out who he was because of Chel, so he had to run, or threaten with his knowledge. She felt that Victor didn't need to handcuff him. Victor thought he could handle it, but Riley was stronger than he expected. And then Riley got shot when injuring Riley had not been part of the plan. He didn't think about telling John not to, who's now on leave for two months. (He felt bad for the kid. The only reason he had chosen him as backup was to give him field experience.) (AD day 21, strip 13)

They've been trying to obtain an alien specimen or at least a sample for years. If his daughter had not been brought up, things would likely have turned out differently. They keep on using Earth for tests and abusing humans. Every sign of alien life they had encountered in their years in the unit had pointed to aliens doing research. They had numerous accounts of abductions, some legitimate, most had other sources. They spent a lot of time debunking the fakes and working through the problems of those who had legitimate stories. And it worried him that they didn't know what they were doing to Chel. (AD Day 21, strip 14)