War in the Sky 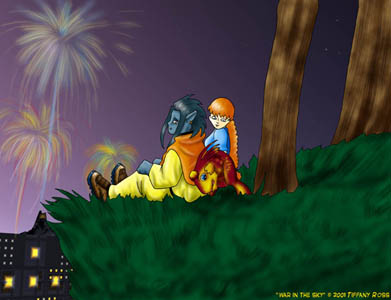 "I don't see a point to why we're down hereâ€¦ ow." Lexx stumbled over an exposed tree root. He wasn't having a pleasant hike and the point of it really escaped him. There was not any logic in traipsing through a forest when the sun was setting. A branch smacked him in the face and the limbs threatened to entangle his hair. "Argh!"

"You know if you didn't shuffle your feet you wouldn't trip over things." Chel scolded the alien. Lexx thought she was enjoying his predicament. Everything was out to get him and for a moment, he wondered if she wasn't planning on doing something malicious to him as well. This journey alone was horrible and she called it fun.

Lexx wasn't particularly fond of Earthlings thoughts of what was fun. He'd rather be reading a book or doing some research he needed to complete. Stealth seemed to be enjoying her walk, but then again, she was a cat. Zeta trailed behind the three, panting with the exertion on his short stubby legs. Despite his weariness, he trudged on valiantly, not about to be left behind or admit he was tired.

Chel grinned to herself. She'd been up here when she was a kid a lot, so she knew exactly where to walk without tripping. Lexx on the other hand, didn't seem to fair so well in the dim light. He grumbled the entire way.

"Why did you insist on coming here? What is out here that you want to see so badly that you'd drag me out here as well. I didn't want to come you know. I could be sitting on my ship right nowâ€¦ keeping my clothes clean." Lexx complained, hoping she'd want to go back to the ship soon.

"Lexx, please. You'll like this!" Chel smiled back at him. "We're almost there anyway." She slowed down as the trees thinned and the grass thickened, waving in a gentle breeze just below her knees. It smelled good. Refreshing. So much better than sitting in the ship and its oddly over purified air, devoid of the smell of earth and plants.

"I will like this? I don't like this so far, so how can it get better?" He was determined to be miserable no matter what and make her pay for the entire trip up here. Lexx scowled and brushed his hair back, imagining how much trouble he was going to have later getting it all straight and neat again.

"Ahhh!" Chel stopped at a break in the trees and ran forward, arms in the air.

Lexx was slower in following, noting that they were very close to a ledge and very high up. They were on the outskirts of Chel's hometown and the lights were all that could be seen clearly within the dark skyline.

"Ooh, pretty!" Zeta hopped into the grass snapping at a few fireflies, their golden lights flickering as they flew in and out of the grass. Stealth sniffed disdainfully, not about to jump after them if Zeta was going to. Nose in the air, she strode by Zeta and followed Chel; tail swishing slowly back and forth.

Chel looked back at Lexx. "This is perfect!"

"Perfect for what? Killing myself?" He stepped to the end of the ledge and peered over it. It was steep and quite a way down. The breeze was refreshing after the hike right there, so Lexx stood still, letting it hit him in the face but resisting the urge to smile about it. He was supposed to be hating this entire excursion and nothing was going to change his mind about it.

"It wasn't meant to be funny," muttered Lexx dryly. The view was pleasant from here and actually interesting. Lexx thought he could see some sort of odd flickering lights down in the darkness. That was odd. He didn't remember seeing those before.

"Lexxâ€¦ come over here." Chel called out to him.

Lexx turned and stared at the girl. She was sitting in the grass. "What are you doing?" He scowled. "You don't expect me to sit down in it too, do you?"

Chel nodded, motioning to the grass next to her. "It won't hurt you, Lexx. It's just grass."

"You've heard of poison ivy, right?" Lexx folded his arms in front of him, grudgingly stepping forward. "It occurs on your planet so I'm sure you're familiar with it, plus, imagine all the parasites that could be in that grass, just waiting to latch onto you."

"They've never bothered me before." Chel leaned back to lie in the grass, slipping her arms beneath her head. "It's comfortable. Haven't you ever lain in the grass? Or at least something like it."

"When I was too small to know better.' Lexx decided to humor the girl and slowly sat down next to her. It wasn't often that he got to look at the stars from this side of the atmosphere. Nearby, Zeta was still chasing the fireflies without a lot of success in actually catching any.

"You should really lighten up, Lexx." Stealth purred, flopping over in the grass and rolling. "It's a nice evening. You don't get many evenings like this, I should know."

Lexx frowned, "I'm not laying down in it or rolling."

"I don't expect you to." Chel grinned.

In the distance, there was a loud boom followed by a flash of light. The sound and burst of light sent chills immediately through Lexx's body. He blinked and stared out over the city. Zeta thumped up against his back, trembling. "Loud!" The dice whined.

Chel looked at Lexx. He was strangely still as the sky was filled with more flashes of light followed by popping and crackling sounds, backed by the occasional earthshaking boom. Lexx didn't blink, not understanding what was going on.

"Lexx?" Chel pushed herself up, noting that he'd begun to shake slightly. She hadn't thought she'd get that reaction. Fireworks were fun.

"Why did you bring me here?" Lexx's voice was low and his tone even, but he didn't look at her. "I don't want to see this, this is horrible."

"What do you mean? They're just fireworks." Chel inquired curiously. "They can't hurt you."

"Chel, â€¦ do you know what war looks like?" He turned, raising one hand to motion to the sky. "That is what war looks like. That is what happened to my mother. That is something I watched from a view port in my home when I was a child. That is somethingâ€¦ I do not want to see!" Lexx started to get up, unable to stop shaking no matter how much he tried. Unfortunately, Zeta was right under his feet. Lexx ended up back on the ground.

"Lexx, I didn't know." Chel got on her knees, offering a hand to Lexx. "Now that I mention itâ€¦ I guess you're right in a way, but really. That's not war. This is a celebration of independence and it's prettyâ€¦"

"Maybe to those who never saw it," growled Lexx, refusing the offered hand and shifting back to a seated position. Zeta was trying his best to hide his head against Lexx.

"I'm sorry." Chel felt she should apologize. Well, that was a good idea. She had wanted to come out here and do something fun. Just watch the fireworks and show something new to Lexx. She hadn't dreamed that it'd turn out this way. Now, she felt horrible and cold.

Lexx was silent, staring at the ground and gathering his thoughts, ignoring the sounds and lights. He felt strange, his mood heavier than usual and for a moment he thought he was going to cry. What an idiot he was. What a freak and weakling. He hated being outside his own controlled environment where he could avoid anything that would remind him of his family and home.

He was ashamed of it all. Control was nearly impossible and Lexx had to have complete control of everything. He pushed it back, concentrating on getting rid of his thoughts, taking note of how unstable that area was. Push it back. Push it down. Lock it away. Do not think. Don't let it bother you. These were the things he repeated over and over to himself. He wouldn't fall apart. He would not allow himself to lose control.

"Are you all right, Lexx? We can leave now." Knowing how much he hated it, but deciding to do it anyway, Chel reached out to lay her hand on Lexx's shoulder, trying to get his attention.

He flinched and looked at her. "I'm fine, but I would like to leave." Lexx felt even worse, the thought entering his mind that she had just wanted him to relax and enjoy the view. She didn't know. He stood and offered her his hand.

Chel sighed, looking away and not accepting.

Lexx sat back down, Zeta tried to get on his lap, still quivering despite the show being over. Stealth was nowhere to be seen. Silence. He usually loved silence, but this was the uncomfortable kind that he knew he should be saying something, but was unsure of what. Why did she have to do this to him?

"Ok." Chel started to get up, only to have Lexx grab her arm and force a smile onto his face.

"Wait." He spoke softly. "I may not have enjoyed the â€¦ fireworks, but I do enjoy looking at the sky when it's clear like this. I like the sound of the wind up here and the leaves and the grassâ€¦ I even like the way this stuff feels when I lay down." Lexx was reaching for things to say and let go of her hand to lie down in the grass. As much as he loathed the girl's presence, it bothered him when she had that look on her face. It was the same look he saw in the mirror every morning and evening.

Chel gave Lexx a perplexed look. He had to be the most confusing 'person' she'd ever met. One moment he seemed to hate her, the next he'd do something nice, then he'd act as though nothing had happened and irritate her. She smiled and lay back down in the grass. "Ok, I don't mind."

Zeta looked at the two oddly. He'd given up trying to seek cover once Lexx laid down, realizing that the 'war in the sky' was over. A lightning bug flickered across his nose and Zeta went after it. Stealth was nearby in the grass where she'd been hiding. She chuckled to herself and decided to sit up and wash a few specks of dirt from between the pads on her forefeet and appear to not have been bothered at all by sounds.

Control was retained and all was well with Lexx's world. He considered for a moment and smiled. He did like this.