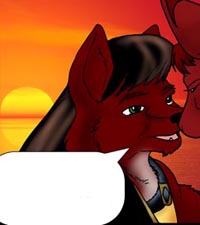 He is the long lost relative of the Akaelaes and was manipulated by Rama during the Centralis War in an effort to destroy the Akaelaes. He ended up realizing this and escaped from Rama, losing an arm and a leg in the process. (Sink or Swim, strip 208) He ended up saving the lives of several of Centralis' best as well (this might have ended up causing him to voluntarily surrender instead of being merely captured). He would end up being placed under Cere's guard, much to her displeasure at first. They eventually become close and would end up developing a relationship (although he is also a persistent suitor of Sheana).

Like other Genetic Elites, he is short, shorter than even Cere.