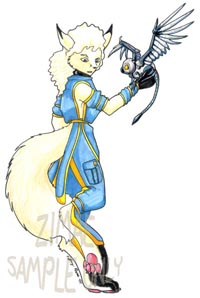 She was considered a reject amongst her kind, so she has a general dislike of Fox, but she likes her technomages regardless of which race they are. With the exception of her students, she is not nearly as nice as everyone else believes. She is in league with Rama because they have similar goals. He has promised her that the technomages will be the ones second under him, and that is where she believes they ought to be (but if Rama fails to uphold his end of the bargain then things could get very dangerous for him).