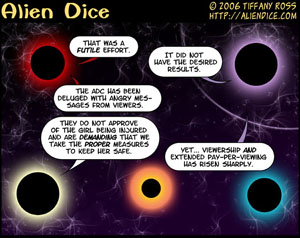 It derives its profits from the Alien Dice Game, and more recently the Alien Dice Master Set game, as well as all activities surrounding them - be it video feeds of the matches, gambling on the matches, selling Premium Passes for people to meet their premier players, or even the sale of spin-off products like Alien Dice Junior.

It currently operates the Alien Dice Academy which takes in orphans and unwanted children and trains them for the Master game, though they also have initiated a breeding program for it.

Unfortunately it does not always operate aboveboard, and many of the 'orphans' it takes in are in fact kidnapped or reported as deceased to their families so they can be claimed. Such happened in the case of Shira Lexx and Shira Kaimar, where delays caused by distance between them and their grandparents on Litta after the death of their parents were delayed further until enough time had passed that the ADC could 'adopt' them as unclaimed. (AD Day 21, strip 111)

The ADC owns the players and can make them do anything they want,… one way or another, even if the player thinks it's their choice. To avoid the galactic console’s anti-slavery laws, certain conditions had to be met in the ADC's contracts. It was perfectly legal to have a nondisclosure agreement while a player was in the game and under employ by the ADC. Once the indentured player completed the game, he or she could talk. They thought that this would keep abuse from occurring. They were short sighted. There were loopholes there from payoffs. (AD Day 10, strip 28)

The holdings of investors can be inherited.

The business of the ADC is conducted through the ADC Headquarters Main Relay, where investors patch in for explanations from the shift router. The elite investors congregate separately, each displaying as a colored orb along with a shift router. There are at least 15 of them at the topmost level. (AD Day 10, strip 44)

They have an interest in breeding Lexx, due to his being a Pure Strain, and likewise have an interest in Shira Alyssa Kane for the same reason, so they have a larger gene pool. They're afraid his developing relationship with Chel might jeopardize it, however, with the ratings and profits surrounding him being at an all time high, they don't want to react too hastily, but want to maintain control. (AD Day 10, strip 44)

They tried hiring a Mimic to be rid of Chel, (AD Day 18, strip 120) but when that failed found themselves deluged with angry messages from the viewers stating they did not approve of harming the girl and demanding that steps be taken to keep her safe - although on the plus side viewership and extended pay-per-viewing had risen sharply. This conversation was one of many that were occurring simultaneously, with a flood of questions and concerns from the investors. There was a deep concern about Lexx's progress in two directions. One side wanted Lexx terminated, the other wanted him released from his contract and steps taken to ensure that no other players managed to get as far as he did. There were a few who were even suggesting that they should drop the master player game. It was too threatening to the future of the ADC. (AD Day 20, strip 99)

The Purple/Central Orb stated as a result that they would abandon the current plan and proceed to the next one... and if that failed they would call the Gauntlet on Lexx. (AD Day 20, strip 100)