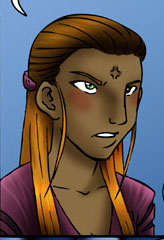 She was adopted as a baby by King Laish when her parents were killed in a fire that was, unbeknownst at that time, deliberately caused by Rezna. In No Angel, she would confront Rezna when he attacked Sean and Stephen, and then bragged to her about what he had done, compelling Alex to sic her Acid Whip, Azure, on him. (No Angel, strip 56)