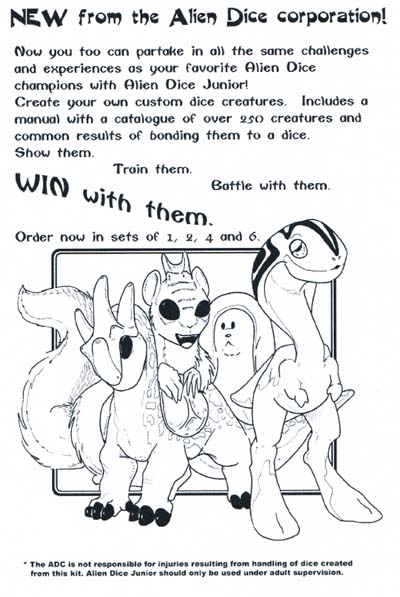 NEW from the Alien Dice Corporation

Now you too can partake in all the same challenges and experiences as your favorite Alien Dice champions with Alien Dice Junior!

Create your own custom dice creatures. Includes a manual with a catalog of over 250 creatures common results of bonding them to a dice.

Show them. Train them. Battle with them. WIN with them.

The Junior set was introduced in a short comic where a young Saign's (living on the Kouwrine home world) friend named Clorie was given as a gift an advanced release of the new Junior set due to her interest in the Alien Dice Game, as well as a set of 5 Sallomandyrs to bond them with - provided she also let her brothers and sisters pick out one as well. Clorie decided to also let Saign have one... much to her surprise since they were expensive. Saign is shown to obtain a spotted sallomandyr.