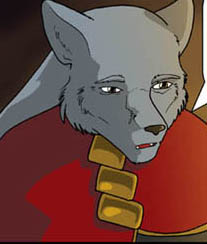 He was one of the original twelve Wolves that were kidnapped by the Mouln Phadra (Squid) and turned into Genetic Elites in the year 137 due to their genetic tampering over wanting to create pit fighters for profit. Together with Shean and a number of other Cyantians, they defeated the Squid in a nine-year battle and either wiped them out or drove them away.

After the defeat of the Squid, Alpha helped found Centralis and form the Council and remains their leader even by the time of Akaelae.

When Rama grew older, he fell in love with Sirene - a union Alpha would not approve of due to the chance of deformity of cubs due to Rama's mixed heritage, and sent Sirene away despite her objections. (Akaelae, strip 265) When Rama tracked her down and pursued a relationship, Syrys confronted and fought him, ending the relationship, and Rama never forgave them for it. (Akaelae, strip 266)

In the years 487-496, the Ridge Wars (A.K.A. Elite War) start with the Fox (although Rama would end up being at the center of it). It was during this time that he helped take in the famous Gold Vixen, Danie (and lost his son, Syrys, causing him to end up believing that he was dead). As the years wore on, he remarried whenever a mate died on him and fathered more cubs through them. Because the Genetic Elite gene is recessive, most of his children were normal Wolves and they died of old age. By the time of Akaelae, Syrys is the only one of his children still alive. (Akaelae, strip 235)

In the Satin and Silk Prequel, he is reunited with Syrys. He also meets Collin, Cilke(Silk), Chatin(Satin), and Quinn; all of whom he takes to Akaelae Towers with him to adopt.

By Akaelae, he is having to deal with the threat of the Fox once again and the threat of Rama. He is currently expressing an interest in Vin.