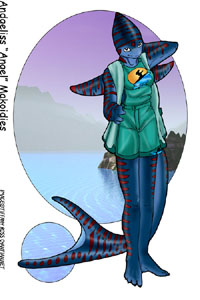 Full Name
Andgeliss 'Angel' Makoidies
Species
Craih
Age
20 years apparent (12 actual?)
Type
Staff
Function
Physician
Quote
'Relax, you'll be fin in no time!', 'In the ocean, no-one can see your tears... '
What is your character's personality?
Angel sometimes appears to be a bit

scatter-brained, but this is actually the result of a certain single-mindedness. When something important is on her mind, she becomes careless about what else is going on around her, and may run into things (or people) drop things, put inappropriate condiments on food, answer the wrong question, etc. By the same token, she is single-minded and unbending about medical care - a very no-nonsense doctor.

Likes
Swimming, fish-watching (like bird-watching; she will want to go to earth on

holiday), being around people, playing the harp, and generally having a good time, although her upbringing left her little time to do so. She is a music fan, and likes several types.

Dislikes
Hostile patients (A tough nurse showed her embarrassing ways to settle them), People who injure others (or themselves!) thoughtlessly.
Strong Points
Incredibly fast and efficient in medical situations. (Although this

sometimes makes her appear to be running over people.) For a Craih, she is small and wiry, so she is relatively quick and agile, while still very strong like all Craih.

Weak Points
The previously mentioned absent-mindedness (which can sometimes make her seem to be flirting outrageously when she is really thinking of something else, or wander into the wrong place and become lost, or forget to take care of herself...), Sometimes loses herself in her work or studies, sometimes too trusting. She can be uncompromising when a patient is involved.
Something Angel would never do
Abandon a patient. ('No-one gets left behind!' )
How does she interact with others?
Angel genuinely likes people, and is quite embarrassed when she appears to ignore someone - give her a chance, and she is a loyal friend. She loves people who help her forget the more serious aspects of her life.
Mention if they carry a weapon of some kind
Big shiny teeth - and doctors know BAD places to hit someone. She knows how to use a stunner, but doesn't carry one around.

Give an example description
Angel weighs about 200 lbs (a slender, graceful Craihs - considered petite among them) about 6' 5" tall. She is built mostly like Cypher. Rather than black, she is a deep blue, with a light blue belly and lower face. Her tiger markings are blood red, her eyes a startling purple. (Her coloring is that of the blue Craih, considered a bit exotic.) She is fairly well muscled, in the manner of her kind. She is most often seen in her medical uniform (Don't you dare damage one of those expensive custom uniforms!), but does have a wardrobe, and will occasionally walk around in a swimsuit, simply forgetting to change out of 'home clothes.' She is pretty.
Why is it essential that your character is here at Mars Academy?
Well, Ciphyr needs some time off! Actually, Angel read about Ciphyr and the Academy while she was training and became fascinated with the project.
What are their qualifications?
Accredited trauma surgeon. (Not sturgeon!) Also trained in Off-world anatomy and veterinary medicine, and psychological counseling. (Not a psychologist, but could assist the counseling staff if needed.) Dedicated and energetic; truly a game fish...
Goals in being here?
Has a deep belief in what Darius and company are trying to do here - and likes to feel needed.
What is your character's nature and thoughts on others of her species?
She is very grateful for genetic memory, and the images and knowledge and sense of history that comes with it, although the dreams can be distressing. She feels that she was given the 'land-walking' ability for a reason, and intends to explore it.
What is her view on other species?
Has a fascination for them, at least biologically. If meeting someone with a radically different biochemistry, she would be almost desperate to examine him, her, or it. As people, she just likes meeting everyone.