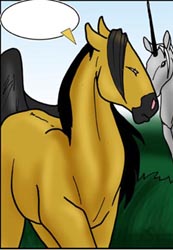 Equis are four footed herbivores - Horses, Pegasus and Unicorns that are native to Cyantia. (As opposed to the two footed Equine Natives, or the Exotica Genoworks created Horses) They can interbreed amongst themselves and do not have a language that is understandable by the average Cyantian or human. Wild Equis have their own societies, usually with a stallion ruling the herd, while the tamed ones are no more intelligent than your average horse and not capable of understanding higher concepts.

They travel in small herds, young males and old males are the most common to find alone. Being separated from the herd does occur, but usually the herd will search for lost members very diligently... now.. troublemakers or simple bad 'omens' will get members ostracized...

Broken legs mean death to adult Equis. They're too heavy to lay on the ground for a long period of time or to be supported by three legs. Younger Equis can survive broken limbs, but only if they have a healer in herd. They heal fast and can be made to behave and not exert themselves until the healing is done. Dislocated shoulders can be fixed though, gashes that leave heavy scars can be fixed.

Not all Equis are sentient, and while those that are not are not outright kicked out of the herd, they are usually ostracized and kept to the outer edges of the herd where they tend to be the first picked off by predators. They can't fully understand what other Equis are saying, but their own instincts to remain with the herd would be enough to keep them a part of it.