Gryphons come in MANY species, but the basic ones from largest to smallest size are Northern, Gurdan, Volcano, Islander, and Flurry. There are many other subsets of these species including some plains dwellers who are flightless. Gryphons range in size as small as finches to as large as the Northern Gryphons, which are bigger than Shivae. The females tend to be larger than the males. There are as many variations of Gryphons as there are birds and cats. 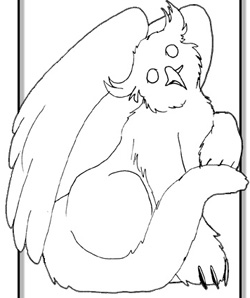 Northern Gryphons are the largest and heaviest of the Gryphons - a Northern can fly with an adult human or Alpine snow leopard riding it. They prefer cooler climates, but it is not uncommon to find them in moderate regions. Their coloration is normally white, light browns, greys and marked with rosettes, spots or striping. They are very often night time or evening creatures. Very calm, thoughtful and intelligent. Planners, not fighters, though they can take down Shivae and outfight Acid Whips. 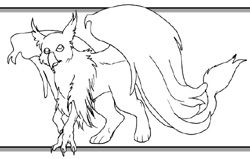 The Gurdan Gryphons are second largest, being large enough to bear a child or Silvestri Mounty aloft (4-6 feet tall at the shoulder, 200-400 pounds). They are commonly black in coloration with stripes, sometimes variations of orange, but mostly black. Their beaks are gold, red or orange. They are more laid back than Volcano Gryphons and do not often form large colonies. They like moderate climates. Some of them have learned how to use fire. Sometimes their chicks need help hatching. They tend to avoid cold weather since they lack insulation on their wings, and the cold will make their ligaments 'lock up', making it difficult to fly. 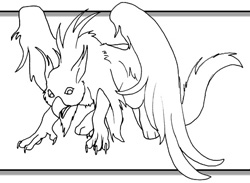 Volcano Gryphon are third largest, getting to be the size of a Great Dane. They are commonly white, gold, orange to red and dark red almost black with touches of gold, orange or red on their main colors. Their beaks are black. Very colorful, very aggressive. They like warm climates and often nest near volcanoes. Volcano Gryphons make use of volcanic burrows and areas with heated springs.

Islander Gryphons are small and brightly colored like jewels, favoring tropical climates. They're like parrots in coloration, more varied than any other species though. They have a talent for weaving, and are the only Gryphons capable of making cloth. (Cler, strip 213) They also have the ability to mimic speech and sounds like Earth parrots. They grow to domestic cat size, and prefer a diet of fresh fruit and nuts. 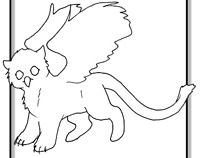 Flurry - The small version of a Northern Gryphon. When full grown, it maxes out at about ten pounds in weight and is about the same size as a miniwhip (or just a little larger than a house cat). They have very nimble fingers and are far more intelligent than alarm whips. They know how to stretch and clean hides - the flurries do most of it. Working together, the big and little Gryphons CAN tan nice soft hides. They do tend to use every bit of an animal, but do not like ingesting fur to begin with. The flurries are also weavers and binders.

There's two different kinds of Cheetah-style mixes. One has stunted wings and is more feline looking, (possibly related to or the Schism Runner) the other is smaller with hollow bones, incredibly fast in the air and on the ground, kills by first stunning the prey then suffocating it until it's dead. Very weak jaws and not really strong claws either.

While the different groups readily blend, they do not often interbreed. There are a LOT of different species of Gryphons and within them, subspecies. The majority of Gryphons ARE omnivores, but they do not all have the same kind of beaks. They also have differences between the species in legs covering, body build and ears. Crossbred chicks tend to be sterile and often become healers and very powerful in a clan depending on their crossbred attributes. They are watched more critically than pure-bloods and often forced into positions against their wishes. Positions in a clan are very, very important, but it's not fun for the chicks to not be given the same choices as their pure-blood clan members.

The name given to them as chicks is not their permanent name. At about one year of age they choose the name they will go by.

Unlike Shivae, the older a Gryphon gets, the harder it is for them to fly. Only the smaller islander and Flurry Gryphons can fly all their life.

Gryphon chicks tend to be rapacious little things. Not every creature looks at death sympathetically... to Gryphon chicks it's YUMMY FOOD TIME!!

Although the Gryphons are omnivores, they feel shame is eating something they didn't kill themselves.

When they attack from the air, they can easily take out prey their own size, alone, because they tend to pretty much break backbones and necks with their impact. It's not uncommon for pack or pair hunting to be used to flush prey out into the open for a dive attack. This is the primary way of killing prey animals. Other ways are dropping from trees and such. Most do NOT attack from the ground if they can help it because they are at a big disadvantage.

The bandaging on the feet shown in Vas strip 311 is nothing more than scraps of hides tied with ligaments to try to keep the cold off their feet. Unlike birds, they do have a strong supply of blood that goes to their feet and muscles, so they are at risk of frostbite.

Through the use of furs which they've tanned, and their fire-building skills, many Gryphons are able to build themselves a warm winter home - a practice that's been in use for generations.

Gryphons live for a VERY long time because of their life structures, about 120 to 160 years (although less when domesticated). When they are past the chick rearing years, they teach the young of their own, or others who are receptive to them.

Some of them refer to their own kind as 'Softwings', because due to the shape of their wings, while Shivae fly faster, they fly quieter. (Vas, strip 308)

They don't tend to like being anywhere NEAR Newcomer Cyantians. Overall, they hate them and avoid them. The exception to the rule are those that have been domesticated - such Gryphons are very loyal to their masters. Fox prefer these creatures over Whips.

The problems Mura mentioned in Shivae! with her old clan involved a situation where too many Gryphons were content with where they lived and didn't leave, causing the area to be overrun temporarily. Then a disease very much like rabies hit and spread, further complicated by a lack of game and extreme close conditions. After that, they put a cap on their population, and started kicking out young Gryphons when they get too close to it - basically make them leave and form new colonies.

The following 21 pages are in this category, out of 21 total.