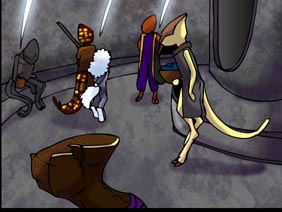 This is a race that looks somewhat saurian, with a hardened forehead like the ceratopsians, bright colors with a variety of stripes and spots, and two tails with a common base. They have a large colony ship that's currently located in the Cyantian Solar System.

They have apparently had interactions with the Wolves before, not necessarily friendly. The one who answers the communique alludes to the fact that they hold captive many cubs from Cyantia, though denying saying so directly when the point is pressed since cubnapping is illegal. (Akaelae, strip 447) They feel however that Cyantian laws do not apply to them, and hide behind claiming that they are merely a colony ship passing through seeking no incursions, and any attempts to retrieve the cubs would be an attempt of the Cyantians to enforce their statutes on them and infringe on the protections set forth for the colony ship by the IGC... resulting in Cyantia being tossed out of the IGC. They do offer to return the cubs in exchange for being allowed to land on one of Cyantia's unoccupied continents - a prospect Alpha rejects as not being a fair exchange, at which point they terminated contact until Alpha would agree to it. (Akaelae, strip 448)

They apparently have enough captives, that they find it common enough to see a collared captive running late night errands on the ship, (Akaelae, strip 453) or cleaning the ships. (Akaelae, strip 463)

Mealtime for the family seems to employ the use of a communal trough. (Akaelae, strip 444)

Due to the fact that Lan was hunting at night, and that Alpha Akaelae felt the need to shut the shades and turn off the lights before contacting them, they may be a nocturnal species. 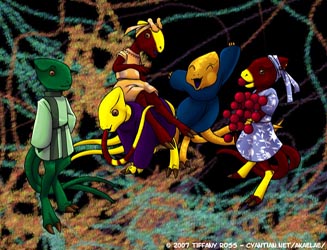 They tend to have a lot of chicks, which are mostly ignored by the adults, most of which end up starving to death because they don't have enough food to feed everyone. They see this as a way for only the strongest to survive, having adapted to the facts and letting them fight it out instead of choosing who gets to eat the most. (Akaelae, strip 466) The chicks are cute, but nip. (Akaelae, strip 468)

The Rastin Leader would call, furious about the loss of a ship, but Alpha would point out that IGC ships present would confirm that nobody came from Cyantia to take it... and inferred it was probably taken by the cub he refused to return well within their rights to escape. (Akaelae, strip 470)

Five chicks snuck on-board the ship that Celina and Lucian escaped on during Akaelae, (Akaelae, strip 464) however the Rastin leader called for the return of six chicks in his dealing with Alpha - it is yet to be seen how that will turn out, but Alpha points out they will shoot at any Rastin ships attempting landfall after them now that they know they cubnap, (Akaelae, strip 471) and suggesting he'd return any Rastin chicks he finds for the return of all Cyantian cubs they have. The traveling chicks meanwhile were left with Crissy to care for them. (Akaelae, strip 472)