Whips come in several varieties. They're mainly called Whips because they use their tails to defend themselves, The bony protrusions on their tails extend into spikes, resembling collapsible grappling hooks, extending into four sharp barbs. Some species of Acid Whips have a very nasty tail design... it's actually meant for stunning prey in a flying pass (Since once a Whip is grounded it takes a lot of effort to get back into the air.) They are able to control the digits of their tail, though they keep them folded back most of the time. The skin flaps on their tail helps reduce drag while flying.

They range in size from the "Mini Whips" of a few feet, which are frequently used as familiars, up to the large dragon-sized "Acid Whips" used as mounts and weapons.

The small Whips can leave rather painful welts, even on creatures with fur and they can also spit small amounts of fire, and possess a venomous bite. Their venom is about as powerful as that of a rattlesnake that acts as a powerful muscle relaxant. So the smaller the creature, the faster it falls. During the winter Mini Whips cluster in groups and start small fires to keep themselves warm. They understand Shivae speech, but are unable to speak it themselves.

The larger Acid Whips speak another language, but they CAN learn to speak Shivae roughly and a few do. They just don't seem to respect the laws of predators that most Shivae and Gryphons do because they're bigger. Elder Acid Whips would probably be likely to be the ones who know Shivae. So would their healers.

Larger Whips will sometimes migrate. They migrate by temperature and don't go in any particular direction, just away from the cold. (Usually following their food) They can handle the cold without serious problems if need be, and are also known to build fires to warm themselves.

The male Whip is often referred to as a bull, and behave similarly to male elephants/deer, etc. Acid Whips when fully filled out are two to three times the size of a full grown Shivae. They also have manes and fringes depending on their species. Females tend to be larger, will have a couple of life mates, and are referred to as queens. They are dominating and will subjugate other males and females to raise their own clutch. It keeps their numbers down since a queen will lay from 10 to 20 eggs at a time.

Miniwhips are known by many names. Fox call them tree mites, alerts, or Xanxes Butterflies (but consider them to be pests and have little use for them). Wolves refer to them as Whips. Mounties name them fairies. Shivae view them as alarms. And to the Koyoties, they are merely called, breakfast.

Miniwhips also have a fondness for Honey Nuts and often make their homes in their trees. Their eggs are also camouflaged to look like a honey nut with a bug inside.

When Whips in general hatch, they often have baby stripes for the nest which fade after about a month.

Acid Whips actually spit an acid that catches fire the instant it hits the air. Smoke is a precursor of course, and also a way to keep the acid from igniting in their mouths. Acid Whips are almost useless as mounts anywhere outside the mountains, but there they are convenient transportation over the rough terrain, and fast. Being larger than Shivae, they also can't come inside anywhere most buildings. Adult Acid Whips stand approximately 15 feet tall at the shoulder, and can grow to three times that length. When moving through forest or tight crevasses their wings are folded up above their body to prevent dragging or snagging. When they vocalize they have rumbling-deep roaring sounds, along with when they're being affectionate more high pitched sounds. Of course, they also use some sounds to confuse their prey.

Acid Whips have bigger teeth than Shivae, but still not massively large, because they use their weight to stun prey. Catching smaller prey is a bit more difficult for an Acid Whip than larger prey. They are serious predators, and even a weak young Whip can take out a Shivae.

Whips, like most other Cyantian species have thin fur coats. They possess silky tufts of fur about the shoulders, where their wings join their body.

Normal whips live anywhere from 20 to 30 years if left alone, while those who've been altered for technofamiliar use live considerably less. *Take note that it's not the Wolves who did this.* 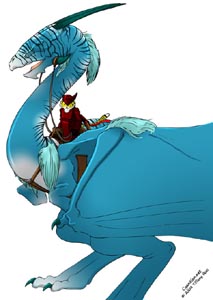 Mounties used whips as mounts. The leads are short, only because it's set up on an automatic coil to shorten and lengthen it when necessary so that they don't get tangled. Leads are typically only used on juveniles until they learn their rider's cues. Riders do not use the same signals to communicate with their whips to avoid confusion.

The Humans living in Mounty territory will often bond with the whips, which means the young whip is raised together with the child who is going to be its rider. (Akaelae, strip 523)

At the time of Sink or Swim it is very rare for a Cyantian to be attacked by an Acid Whip on the mainland since so many have been domesticated. On the continent of Aciace where the majority of the population is wild, a large one has no problem with carrying one of them off. (SoS Chapter 5, strip 14)

The following 16 pages are in this category, out of 16 total.