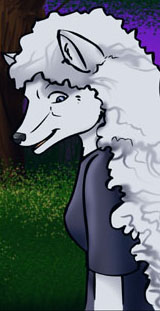 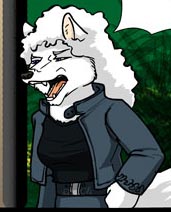 Unnaturally short-tempered and prone to zero patience is the best way to describe this testy female. She is overly aggressive with everything and tends to be on the book about it (not really bad, just don't cross or disappoint her). She has a like/hate relationship with Darius, and is troubled that Sheana does not see that Darius is not serious about her. With either a grim or guarded expression, it is hard to tell that she actually can be very nice (she once gave Vin her piece of pie (Akaelae, strip 59) and suggested to him with a soft smile that he take up Darius' offer to buy his lunch every day (Akaelae, strip 61)).

It would be later revealed that her father, whom she loved dearly, had died of old age due to his Genetic Elite ability finally giving out. (Akaelae, strip 299) Her mother eventually became involved with another male Wolf named Louki. (Akaelae, strip 302) Naturally, Celina resents this, and their engagement, because she feels that he is trying to replace her father. (Akaelae, strip 303) It doesn't help when the plans are for them to move away from all her friends once they are married. (Akaelae, strip 395)

She would then be knocked out by Filaire who used knockout gas, (Akaelae, strip 400) and was being brought into Rama's clutches. Fortunately or unfortunately, she came out of it early, and her squirming forced them to land. (Akaelae, strip 424) She was 'rescued' by Lan, then taken by her. (Akaelae, strip 426) While captured, she would be told she bore the warrior class elite genes, which she did not seem displeased with. Once she was brought to the colony ship, she was to be sold (or fought) to provide income for Lan to fix her ship and feed her family.

Her missing status would not go unnoticed. Her mother and Louki would alert Syrys she was missing, so he activated her marker, (Akaelae, strip 422) and seeing where she was he would send ships after her before she was taken out of the solar system. (Akaelae, strip 435) Due to Quinn's ability to find out secrets, the rest of her friends would soon know as well. (Akaelae, strip 439)

Unfortunately, the Council decided they didn't want to cause an incident with the Rastins, and ordered that nothing be done and called the ships sent to her rescue back, (Akaelae, strip 456) leaving her hopes of escape tied to the recently encountered Lucian. (Akaelae, strip 451) They would steal the ship stolen from Lucian and return to Cyantia... along with 5 Rastin chicks who stowawayed with them. (Akaelae, strip 464)

She would quickly return to her normal life.

Like all Genetic Elites, she is short, but is apparently taller than usual at her age. At age 15, she is 5'9" and 160 lbs. during the Akaelae arc (or 6' even if you follow the 6 inches taller than Darius) and is possibly taller by Campus Safari.