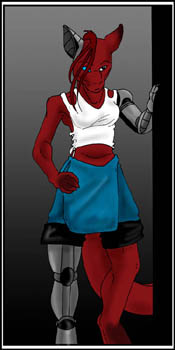 Name
Cere
Species
Kangaroo (EG mod Jilaic)
Appearance
Various shades of red. Her left arm, right leg, right eye, and right ear are visibly cybernetic, part of the "upgrades" Exotica Genoworks planned for the Jiliac developed for the militia. Her left eye is blue, while the cybernetic one is red.
Bionic colors
Steely gray is her everyday use set, gold is the show off ornamental not meant for battle but spiffy looking, black with red/gold is the battle set, while the fragile fur covered ones are for the rare special occasions. Right ear is detachable like her other bionics.

After the Centralis War, Cere would receive her ship and christen it Independence. With her crew, they would make regular shipping routes to various worlds, including Earth. It would be there that they would meet up with Mako, and pick up Tamera, Rayne, and Darrik.

In later comics, they would find a derelict Fox ship and discover a Tree Kangaroo who is connected to the ship's computer. They name her Nil and make her a part of their crew. Upon returning to Centralis, they go on a little R and R to Sunset Haven, along with Zax (whom she has a very close relationship with). Except for Outback who wants to remain behind to look after Nil, despite Cere's insistence on keeping the crew together.