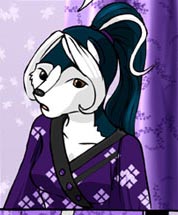 Name
Chatin Akaelae
Alias
Satin
Species
Skunk
Occupation
Student (in Akaelae), Engineer(?) (in Campus Safari)
Appearance
Similar to a Terran striped skunk. Her fur has a blueish tint to it. Has a white marking on her muzzle. Her hair got dyed while she slept by Tae and Kea during Campus Safari, and while not initially happy with it, she decided to keep it that way for a while. She's 5'5" during Campus Safari.
Weight
120 lbs
Age
4 chronologically, 13 physically (in Puppet Strings)
Augumented smell
Strawberries

Although originally introduced in the webcomic, Satin and Silk, their beginnings go back to the Prequel where she, along with Cilke, were created by Exotica Genoworks and have their scents modified (hers would be strawberry). They were left behind, along with Cisco, when their creators fled. Then rescued by Syrys when he was finally awoke from cryogenic slumber (with her help) and fled with him into the wilderness where in turn were rescued by the Mounties. She would be adopted by the Akaelaes, along with her sister. Although she wanted to be reunited with Mekussa.

In Campus Safari, she would end up causing herself, along with Cilke and company, to be transported to Earth when Cilke accidentally pressed a button on her prototype portable transporter, (Campus Safari, strip 6) then sent to an Anime/Furry Con (Campus Safari, strip 10) where they would meet Marcus and Jules. They would receive help from Jules, unaware of her ulterior motives (or Marcus' for that matter). (Campus Safari, strip 30) With the help of a computer, she tries to find a way to get back to Mars. In the meantime, she runs afoul of Velour, along with Needles and Quill until Cilke comes to her rescue. Eventually they are rescued by Darius and company. Twinky would come into her life, disguised as a simple skunk.

It turns out that Silver had been sent to her home on Cyantia to ask her to come to Mars Academy to examine something they had uncovered during an excavation, so they proceeded to Mars. (Campus Safari, strip 122)

In No Angel, she would fly a shuttle back to Earth as part of a rescue mission.