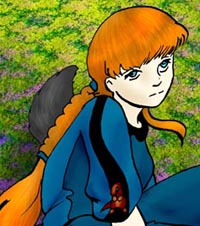 Her name is pronounced Ch-el, not to be confused with shell.

Chelsea, usually referred to as simply Chel, is your average girl next door. She's never been popular, just the girl that's always there to help out when it's needed. Opinionated and a bit quick to jump to conclusions with passionate effort, she's wound up in the game through her cat Mittens, which was turned into a dice by Lexx on his first day to the planet. She originally went with him to get her cat back and hey, what better way to spend the summer than to go on the trip of a lifetime with a strange alien?

She was really bored.

The few friends she had were in summer courses, and she’d only come home to watch the house and relax. While she wasn’t a shy person, she wasn’t what anyone would call popular. Her hair was a point of constant teasing in high school. The glasses she had to wear occasionally were also a target. There was no interest in the things that other girls her age were interested in such as makeup and fashion. (AD, Day 3, strip 1)

She had a father who worked in law enforcement, what branch, Chel had no clue. Something he couldn't tell anyone about, not even his family, but he had guns in the house and Chel knew how to use them. (AD, Day 1, strip 14)

Her parents work for the government, and she has nothing against it or them, though she also doesn't know specifically what they do. (AD Day 20, strip 122) She wants to work her own hours, do her studies and become a college professor. She knew it'd be difficult to get a job in her major, but had numerous backup plans. None of them involved working for the government. (AD Day 20, strip 121)

Her parents had regular exercise schedules and for the most part, kept healthy diets. They encouraged their children to do the same, indulging them in any physical interest. They rode horses, did gymnastics, played sports, well, Andrea and Kalvin did. Chel loved riding horses, especially the great big monstrous one at her grandparent's little farm. (AD day 20, strip 122)

The last book she read that she really liked was Myst, The book of A'na. She really enjoyed that trilogy, but hated the game. Her favorite color is turquoise and her favorite animals are owls.