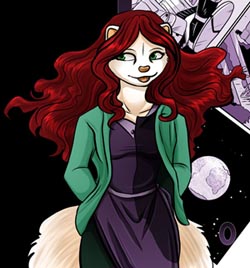 Although originally introduced in the web comic, Satin and Silk, their beginnings go back to the Prequel where she, along with Chatin, were created by Exotica Genoworks. There they had their scents modified, Cilke's would be peach. They were left behind, along with Cisco, when their creators fled. Then rescued by Syrys when he was finally awoke from cryogenic slumber and fled with him into the wilderness where in turn were rescued by the Mounties. She would be adopted by the Akaelaes, along with her sister.

It would be along the way that they would have a run-in with Parot Broadcasting and end up being pawns in a survival game. With help from Twinky, they would escape and Cilke would don her armor and blast the place apart. In the end, they would force Mina to let them go and they would make it safely back to the Mars Academy, where she would be reunited with Syrys, whom she had grown to love.