In the Prequel, he was one of the three skunks that were left behind when the Fox abandoned the place (the others being Chatin and Cilke). When Syrys revived and took them out of the place, Cisco was injured and ended up dangerously slowing the others down. He fell asleep and was abandoned by Syrys after being placed on a patch of warm ground where heatstones lay just beneath them.

In Puppet Strings, it is revealed that he survived and is now grown up, after obviously being rescued by the Digni and living with them for almost a year and a half. Out in the wilderness he is reunited with Chatin, Cilke, and Collin (much to Collin's dismay). He would later be allowed to continue his studies at Akaelae Towers for the summer, and is now a part of the Akaelae storyline where he shares a room with Collin.

In Akaelae, he begins to express an interest in Technomages and goes to the library to check out information on them. (Akaelae, strip 204) It would be there that he would have a run-in with Lucas.

In Campus Safari, he is still in competition with Collin over Chatin's affections. He tried to give Chatin a griffin named Dust who had died and had its consciousness transferred to a mechanical body, (Campus Safari, strip 439) much to her disappointment. (Campus Safari, strip 441) Not only that, he almost gives her Zimre stones in the hopes of officially courting her. But throws them away upon upsetting her after trying to give her the undead familiar (Campus Safari, strip 443) (later on, he manages to convince her to take Dust). After Collin finds and gives Chatin the stones, she confronts Cisco about it, who insists that since Technofamiliars are part of his life, they're part of the package with him, insisting she take Dust with her, and if she returns Dust after her trip to Earth, he'll transfer back to Avistary. (Campus Safari, strip 521) 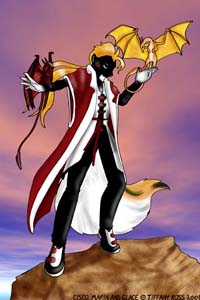