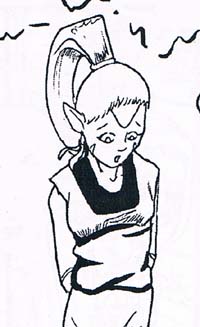 So far has only appeared in a printed mini story with Lexx at the Alien Dice Academy. She, like Acadiu, planned to pick her loss so she'd get an acceptable owner. She was worried about Lexx since he was determined to win, no matter what, and picked his Dice based on personal feelings rather than going for the biggest and strongest.