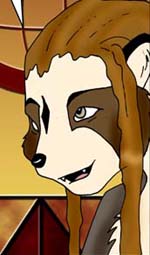 He is the younger of the two Akaelae Siracs (by six months) and was created by Exotica Genoworks to have psionic powers. He, along with Quinn, make their introduction in Satin and Silk Prequel as cubs after they were hidden in the ceiling by older Siracs so that they would not be taken away. They were rescued by Syrys during the incident that destroyed Exotica Genoworks main installation. He and Quinn were adopted into the Akaelaes.

In Puppet Strings, he is in his early teens now now and feels overwhelmed by the lack of male company his age. It is also during this time that he develops deep feelings for Chatin. He goes out into the wilderness on a camping trip with Quinn, Chatin, Cilke, and Sheana. It would be out here that they would be reunited with Cisco. Already Collin now feels threatened by his arrival, seeing him as competition for Chatin. That is when a Sirac named Marion reveals herself to him through telepathy and asked that he get something for her for her master. With her will eventually overwhelming him, he gets her that which she desires. At the end of the story, he is peeved to learn that Cisco will be spending the summer at Akaelae Towers with them.

In Akaelae, he is sharing a room with Cisco and is about to start school for the first time and is not looking forward to it because of all the mental noise that he will be picking up from the other students. In the school, he learns of the presence of Darrik down in the basement and leads his friends down there to look for him. His further adventures are yet to be revealed in this comic. Eventually though, he will be receiving the code name, Morpheus, during the Centralis War.