In Akaelae you can usually find him carrying around a slimboard and a leather satchel full of art supplies - that is his thing. While he enjoys physical sports, he would rather spend his time drawing nature and what he sees. That is among the many reasons he doesn't want to be in a transitional school at all - he would rather be in the training school for perimeter guards and move outside the city where it's nice... quiet... and he can study the gryphons and whips.

He's usually good natured except around some wolves. Due to his size, and by how much of a fuss he puts up when females look his way, he is constantly being pursued by a pack of girls his age and older (Akaelae, strip 28) (although to be fair, some of the girls do only pursue him because of his rank rather than liking him personally). Normally wolves his age are a good foot and a half taller than he is. The females are all around the same height and have a preference for males their own size since they're not as clumsy and uncoordinated. It doesn't help that Darius is also very good at grav ball and several other sports. He's much tougher than his size would lead one to believe. 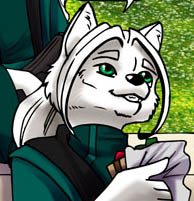