Father, Mother
(in Pawprints) (Darrik's mother is a goutouve warrior, her blue fur would dictate engineer/technology oriented careers, obviously, but those restrictions were a stereotype at the time she served in the gryphon guard ranks. His father was a high ranking black fox courier for the royal houses.)

Tamera
Wife (in Campus Safari and Sink or Swim) 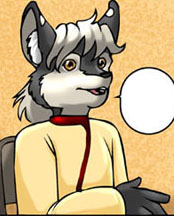 Born on Cyantia and raised on Earth, he knew of life on Cyantia only through what his family would tell him. This was due to his family fleeing through the warp gate (the door of light as they referred to it) to escape from the Gold Fox. He was an infant at this time (and at age 13 he was 10 years older than the last reported black fox sighting on Cyantia). (Akaelae, strip 78) They would settle in the swamp unbeknownst to the rest of humanity save for the locals who kept them safe.

Later on a trip to Gralen Cragg he would meet Tira, a real white fox.

In Campus Safari, and a brief introduction in Sink or Swim, he is now married to Tamera and becomes a father to a litter of four kits that she births during a birthing ceremony.