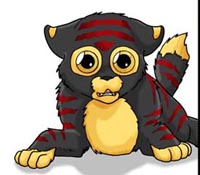 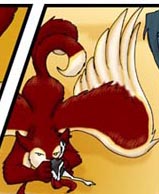 Dash loves being chased, rhyming, and being brushed. He's a glutton for attention, (AD Day 14, strip 12) which led to his fondness for Chel who liked his poetry and gave him attention.

Lexx has forgotten his base, other than he had a lot of fur and absolutely loved being brushed, to the point of annoying Lexx. He kept that fondness, and it was comical to see him going around carrying a brush, especially in his previous forms. (AD Day 8, strip 20)

He seems to have a fondness for Stealth, possibly in part due to their identical bases - although his may have been a King Sivarile rather than the common type. He's been known to occasionally swipe things in the same manner as Stealth.

He has more than once bitten or slashed another Dice that has given him reason to do so. (Day 10, strip 41)

His level 6 side looks like a mature King Sivarile, complete with overly feathered wings and a split tail. (AD Day 14, strip 14) Although Level 6 is his maximum side, Syke has stated he has one more roll to hit because he never transitioned (possibly due to the glitch).

He's scared of Claudia (AD Day 14, strip 14) who likes dressing him up. He was very annoyed when Lexx left him with her when he left with Riley after that battle with Acadiu - she trimmed his claws and painted them fuchsia, twined a ribbon around his tail, then tried to dye his fur (Rook suggested pink). (AD Day 14, strip 78)

He found the idea of Stealth losing to Fly amusing, and felt the urge to track her down and rub it in. (AD Day 18, strip 4)

Dash liked to think on occasion, but instinct was much more fun. (AD Day 19, strip 1)

When he's in a really good mood, he will sometimes glomp Lexx over the relay... much to Lexx's chagrin. (AD Day 19, strip 8)

Lexx feared that it was Tarlic Syndrome. It's contagious and will spread to other Dice in close proximity to the infected Dice. Once it reaches full incubation, it causes constant fluctuation in a Dice's levels and wears them out until they die from exhaustion. He felt he was going to have to put in a termination notice on Dash and go on without him. (AD Day 19, strip 21) Chel disagreed. (AD Day 19, strip 22) He eventually took Dash to a specialist to check. (AD Day 19, strip 26) The 'Dice Vet' determined it was not Tarlic, but an actual hard code glitch in his design. Apparently not all of his nanites are in sync with his code. They calculated a seventh side to Dash and since he lacks any actual setting or design for that size it defaulted him to side 1. It's a glitch that has been documented before and he'd be fine with a little reprogramming, and they'd also bring him back to side 6. (AD Day 19, strip 54) (Lexx also thinks to himself that the reprogramming collar cost a lot, and if it wasn't for Chel's fondness for the Dice, he'd have had Dash terminated and replaced, and would have missed Dash.) Meanwhile, Lexx can't use Dash until the collar has completely found and rewritten the flawed parts of his code, which should take a day or so. (AD Day 19, strip 55)

Is very interested in having kittens with Stealth. (AD Day 26, strip 95)