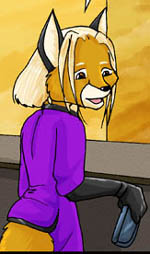 She was part of the scouting group out looking for the ship that had their biounit, Nil, when they encountered the Kangaroos and asked if they had seen it. Then returned to base upon getting the answer 'no' from them. Only later on would she learn that the Kangaroos did indeed find the ship and take their biounit. With permission from Captian Gyette, she, with Toni in tow, would go to Centralis to find them. Their inside contacts at Akaelae Towers would lead them there to where they would witness Nil in their company. (Sink or Swim, strip 174) They know that their cover is blown, (Sink or Swim, strip 227) but this apparently will not stop them since they are now camped out from a vantage point to watch Akaelae Towers, waiting for the Kangaroos to leave with Nil so that they can intercept them (along with the 'Roos so that they can claim a bounty hunter bonus for bringing in each of the escaped "products" alive). (Sink or Swim, strip 317)