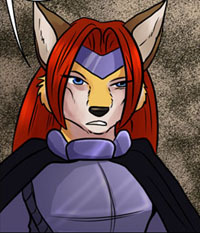 Later on, she is in Centralis with Niram as they spy on Celina and Kela then instructs him to follow one of them to gather as much information on them that Rama needs. With Niram choosing Celina, she follows Kela. (Akaelae, strip 94)