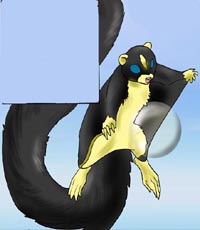 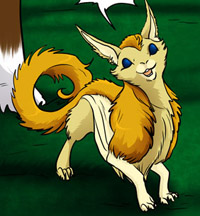 Fly started at level 2, but was quickly knocked out when Zeta over-zealously attacked during the capture battle. He doesn't change a lot from level 2 to 3 (at least not noticeably), and was shocked to discover this. (AD Day 8, strip 32)

Has a light voice with a rapid, almost chirping sound. (AD, Chapter 2, Strip 7)

At level 2 he can stretch the loose flaps of skin along his sides to catch the wind and float like a kite. (AD, Chapter 2, Strip 9)

On achieving level 4 he can fly without the membrane, leaving a trail of golden sparkles. (AD Day 15, strip 37) But continues to use the membrane after leveling up without sparkles.

When Stealth got hit by a car, he tried to tell her something important (that Stealth would be fine without treatment (AD Day 15, strip 49)), but in her urgency to take Stealth to Dr Hobbes, she just got angry at him, and since he really didn't want that, he decided to be quiet. (AD Day 15, strip 46)

He loves peanut butter - enough to attempt using a spoon to eat it when Andrea insisted he needed to use one to get any. (AD Day 16, strip 3)

Is good friends with Sythe (their base pairings were litter-mates). They can talk for hours. (AD Day 16, strip 11)

He sweats, which makes the fur stick up over his whole body, and gives him a musky scent like damp wood. (AD Day 16, strip 15)

Has a rivalry going on with Stealth, which seems to be increasing in violence level with time. This may stem in part from his fondness for Chel and his habit of riding her shoulder whenever possible.

Rolling to level 5, his red fur faded to brown, orange and then gold, lengthening into a thick furry ruff that extended from between his ears, over his shoulder, down his backbone and melted into his tail. Fly's ears lengthened and lightened in color. His head widened and lengthened, but retained its round plump features behind a longer blunt muzzle. Fly's short squat body tripled in size, his legs stretched considerably, but did little in altering his body to leg ratio. His legs were more slender, but his chest was low to the ground in comparison. Wing flaps covered in shorter, finer fur than before extended from his forelegs and swung upward, seemingly retracted and folded over Fly's hips. The flaps folded further and vanished under Fly's tail. (AD Day 23, strip 106) Though thrilled he had leveled up, he was disappointed to realize he was now too big to carry and would have to walk everywhere. (AD Day 23, strip 108)

Fly enjoyed the almost constant attention he received from Keith. Until Chel had arrived, Fly had been pretty much ignored. He wasn't among the biggest, strongest or smartest of the Dice and the others often pushed him aside, but with the humans, he was just as interesting as any other Dice. Fly loved it. (AD Day 23, strip 116)

Has a unisex voice that is light and high-pitched.