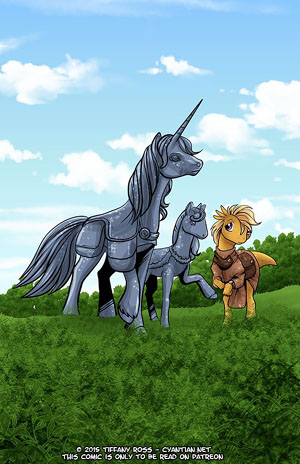 Journey is a Shivae! comic of a different variety. In the past, I have shown the cubs Tae and Kea playing with little Shivae toys that were a parody of the My Little Pony I grew up with, with sparkly jewel eyes and fancy rear ends. These comics are in Cesilee's Diary.

Journey is done from the perspective of an unknown Cyantian Wolf taking the idea further, utilizing the many species of Cyantzium in a grand story about the importance of teamwork, loyalty, steadfastness, and educational technology. It has a lot more meanings, but you can figure those out. This series is an all ages series and has already had the first two chapters completely penciled, so it will begin as soon as I have time.

Journey begins with a single Shivae chick named Sunny, who is an adventurous young Shivae setting out on her own to explore the mystery of unusual stone statues all across their lands. Statues that are posed in every day poses, strolling, doing business, playing, etc, in random places. These statues are unicorns, pegasus, gryphons, dragons, and things called changelings that nobody really knows what they look like.

In the World of Journey, Shivae are marked with three kinds of markings: Natural markings that are always seen, stripes, spots, spatters, patches that Shivae are born with, Emotional markings that show up and are standard across a species, as in, all Shivae have a mark for when they're worried that shows up somewhere on their body and is a signal to other Shivae. The third is called the Inspiration Mark. These markings are individualized and show up when a Shivae's interests and experiences are triggered. Musical notes may appear on them when they are singing, or they may glow if they are magic related, like a vine draping down the foreleg or flames, wind, etc. These are things they EXCEL at. Some Shivae even excel at getting inspiration marks and educating others! If they are thinking about or participating in that activity, these marks show up.

Journey is coming soon to Patreon[1]

Everything begins with a small idea. Journey began with noticing there were things kinda missing from standard children's entertainment. Like, I don't know, my Shivae. :D This is SUPPOSED to be a Cyantian version of cartoon programming for their kids, influenced a little by Earth culture. As a woman, who was once a girl, and is a mother, I get kind of annoyed at how gender centric some cartoons are that are aimed at my daughter. Some are really, really obnoxious in this regard. So I set out to create this story using my Shivae in their own world, broken down for children. Unicorns, Gryphons, Pegasi, and Dragons exist on Cyantia, but they are all nonmagical. This story throws in magic and technology, with a simplified cartoony art style, so it can be done quicker than my other work. My biggest trial will be keeping myself from overshading or overworking pages. When I created this world, I set out to make sure the cast is a mix of males and females, different species and personalities and the main character is Sunny, a Shivae who lacks both wings and magic. In this world, any Shivae can have magical ability at varying levels and specialties, but it's also not uncommon for Shivae to not have magical ability. Sunny makes up for it with The Archive. It's an electronic device she's often seen wearing that syncs to an electronic book, a book, that is filled with flexible input paper so that it acts like a real book, but also makes a copy in her archive, which can be accessed like a book. It also records pictures, videos, maps, sends messages back to mom and dad, etc. :D