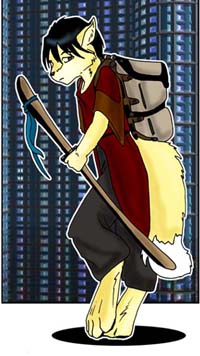 He was on a trip for Exotica Genoworks where Ceigan had a crate with "dangerous animals" for him to deliver to Randin Siere. Unbeknownst to Ceigan, Kaemin had given up following his pelt coloration then and there. When left alone with the crate, he opened it to find a pair of Kangaroo kits to be used as pets for Randin's son (who had a habit of mistreating pets). That is when something inside him snapped and he suddenly developed the need to protect them and named them Shadou and Miste.

He stole the kits and snuck aboard the Independance behind Ash's back. When Ash returned aboard and sat down, he held a knife to her throat and demanded that she fly the ship to Centralis. But Ash overpowered him and disarmed him. Cere confronted him as well, but Kaemin had somehow got hold of one of Ricochete's guns and shot her in the side of the face. Fortunately, it was not serious.

Kaemin tried to escape and was again subdued by the 'roos by being knocked unconscious. That is when they discovered the kits in his backpack. When he finally regained consciousness, his mental stability had seemed to all but disappear as he claimed that the kits were his. When he was drugged, the truth finally came out.

He once had three kits that his wife had just bore: a gold, a black, and a white. The black and white had black skin, the mark of the elite, and were drowned in the river before his very eyes by his fellow Gold Fox who were on birth patrol. These two kangaroo kits resembled his doomed pair of kits, who were named Shadou and Miste. (Sink or Swim, strip 138)

In the end, he let the 'roos have them and returned to his own family, and later moved to Centralis with them. 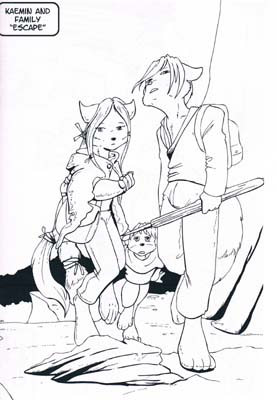