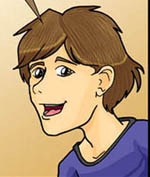 Kalvin is a bit in his own world. He enjoys his video games and DVDs and isn't even phased by the fact that Lexx is an alien. (AD Day 7, strip 2)

He knows from experience it's best not to get involved in an argument between his sisters. (AD Day 15, strip 9)

On a whim he decided to see if he could teach the Dice video games. Fly lost interest immediately, but Drift turned out to be good at DDR. (AD Day 16, strip 2)

Due to the arrival of aliens, his parents would send him and Andrea to live with their grandparents in their country home in another state. (AD Day 26, strip 112)