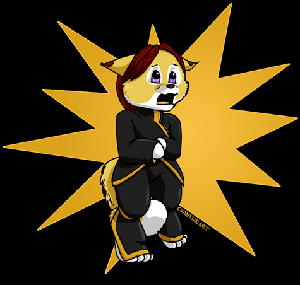 This Gold Fox was first introduced into the strip when he tried to give Jules a full body search when she set off the alarms. (Campus Safari, strip 162) For this, he was beaten up (kick-boxed into a wall, receiving a couple of smashed ribs, dislocated shoulder, and smack to the head) to show her objections. Then to add insult to injury, he was later forced to be her shadow (this was due to the fact that Cesilee tried hacking into the security systems, before resorting to a Tmail to make it look as if the order came from a superior). (Cesilee's Diary, strip 21) Unfortunately, Darius would find out about his new mission - and find it amusing, so ordered him to follow when Jules went into Vixen's Secrets. (Cesilee's Diary, strip 28) It would be this action that would end up having him face an act that Cyantians, especially of dog heritage, consider offensive.

A chapter image from Cesilee's Diary seems to suggest that he has become obsessed with revenge against Jules.

Khaelis was very sad, to put it lightly. He was not only fired from security detail, but was suspended from schooling since it was dependent on a scholarship he received for being in security (and it didn't help that Quinn told Murai about it before he learned of the suspension himself). (Cesilee's Diary, strip 108) Then to make a bad day worse, he was targeted by a group of Technomage students - and even Darius would say they went too far. (Campus Safari, strip 582) They would strip him, dye his fur with pink and green spots (Campus Safari, strip 583) and give him a poodle cut. (Campus Safari, strip 585) It did have a bright side, as their going too far with him had Darius take pity and review his file. (Campus Safari, strip 586)

Full Name
Khaelis Sine
Species
Gold Fox
Age
25
Type
Staff
Function
Security
Quote
"I amâ€¦going to get you for this!"

How much experience do you have with roleplaying?A few years paper & pencil, plus a few months here asâ€¦someone else. What is your character's personality? Usually tries to stay focused while on the job. However, he suffers from a slight case of passive aggressiveness. Doesn't hold up to pressure well.

What things does he like? Those who just let him do his job without causing altercations. Dislike? Those who seem to delight in causing mischief and/or pain for him. Special assignments that take him away from his normal rounds. Female shops.

What are the strong points of your character? Usually tried to maintain a professional atmosphere when doing his job. Sometimes, though, things can get a bit too much for him.

Name one thing your character would never do and why. Disobey an order from a superior - unless he was desperate. How does he interact with others? If you haven't caused problems for him, keeps a prefessional attitude. Otherwise, he will make the occasional idle threat, though he comes off as somewhat less-than-threatining.

MENTION if they carry some sort of weapon. Normal security gear. Though he doesn't carry it on him, he recently aquired a black market .45 plasma rifle.

Give an example description of your character. Stands at about 5 feet, slightly shorter than the average fox. Took the assignment at the Academy since he figured that, seeing how most of the population would be made of students, that it would be an easy assignment. Things have since proven otherwise.

Why is it essential that your character be here in the Mars Academy? (Comic relief, punching bag) Does various security jobs, from customs to personnel escorting.

What is your characters nature and thoughts on others of his species? As long as they don't cause trouble, everything's okay.

What is his view on other species?He has recently had several altercations with humans, most of which ended with him in medical. As a result, he thinks less of them than he could.