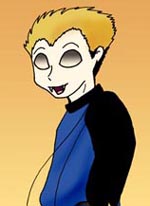 The bookplate Kipiro is on was given to Chel when she became upset when Lexx teased that he would read her diary. (AD Day 10, strip 7) She can scan her already written pages on it, and secure it so others can't read it. (AD Day 10, strip 8)

Kip for short - the male form is known as Kipiro, while the female is Kipa. Although originally owned by Lexx who kept it in female form, when he gave it to Chel she switched it to male.

Kip is a solid hologram associated with a data pad. It has three available forms; male, female and neither. It also uses voice identification to recognize its owner. (AD Day 10, strip 10) It's very easy to use, operating much like a normal computer with lots of self-explanatory icons, with the option of either writing on the screen, or speaking and letting Kip enter the data. (AD Day 10, strip 11)

The male peripheral is a disaster waiting to happen and Lexx knows with the plate flaw that while they may be interesting, if you want to get things done quickly, they aren't always the best choice,... plus, they're nosy and record more than you might want.

Neither isn't based on a template. You either use the peripheral without a hologram or design a completely unique look for it that's not based on a Littan design.

There's a stylus that slides into a slot on the side, and besides talking to Kipiro, he can read already written notes and put them in the plate. Kipiro is a solid hologram, he can move the pages himself and do some small tasks. Their personalities are random, so you have to get to know him and how he works. They have decent artificial intelligence and problem solving ability; this series has a few quirks. If you don't watch him or make the orders clear, he'll make messes and then get frustrated. He might also be temperamental. (AD Day 10, strip 11)

Kipiro has quite a bit of power at his disposal to work with, depending on the level of how he's told to secure the book. He'll bite as the lowest form and just terrorize someone, he can also deliver a very powerful shock.

Kip is a solid hologram. He doesn't get any bigger than that, but he CAN change form. He could make himself look like a miniature Chel if he wanted to. And sound like her too. He has mimicry programming. He can move pages and do small tasks, his eyes are lenses for scanning in pages. He's a decent AI with good problem solving skills.

Now, you have to keep in mind that Kip is an AI and actually more intended for a user who is not using him for anything really serious. He is not recommended for people who are careless and his programming demands that he learn EVERYTHING he can about his surroundings. The safeties are like locks that set him to a minimum and maximum distance and questions. He isn't 'sentient' really, but he DOES have perception and is conscious of himself. However, he doesn't have any empathy for others. He doesn't really 'feel' either, but don't try to delete him, he'd get upset.

He's somewhat curious, and willing to stretch an instruction to get what he wants... such as redefining a room as an enclosed area to sneak out an open door and explore the house when told to stay in the room. (AD Day 13, strip 9)

Since Chel is his owner, he only feels the need to keep the data she gives him secret... what he finds on his own he feels free to tell, (AD Day 15, strip 12) much to the dismay of Andrea whose diary he found and read. (AD Day 15, strip 11)

Kip is SOMEWHAT aware of how his actions affect others, after what he did to Andrea. He knows the power of information, but doesn't make judgement calls on stuff that he's supposed to keep secret.

He doesn't understand Earth slang, such as calling someone 'fine', yet, but is quick to ask to find out. (AD Day 15, strip 12)

He can detect relay waves and read them as well as talk over them. He didn't, because his parameters do not allow such activity unless he is given permission to do so. (AD Day 17, strip 39)

He has access to hundreds of files and feeds on the Alien Dice Game. He's not supposed to display them to Lexx, but can show them to Chel. (AD Day 17, strip 39) He uses the two long extensions from his head for tuning. (AD Day 17, strip 40)

Lexx forgot about how much trouble Kip was the first time, and though he had fixed him, Fly was quick to point out Kip wasn't behaving. He should have been with his plate, and should have made himself apparent when Lexx entered Chel's room, but didn't. (AD Day 15, strip 24) The peripheral had an inclination for trouble. There was no denying that. He would get into anything he could, record every single thing he came across and be underfoot. Lexx thought he set Kip's security parameters to the highest level. He had given full authority to Chel, with a small bypass for himself, since it was still his dataplate. He didn't intend to read what Chel had put into the plate - the bypass was for another reason. He realized he should have told Chel to pick the female version. The female version was a better program. It didn't have as many glitches as the male had,.. mainly because Lexx had kept the female version patched and updated. (AD Day 15, strip 25) While Lexx had been there, Kip had been busy in the living room copying DVDs on his personal storage for access later. The sight of Stealth chasing Fly proved much more interesting, and he hitched a ride on Drift to watch. (AD Day 15, strip 35, strip 38) While they were at the vet, he decided to reward Drift with a belly-rub. (AD Day 15, strip 53)

When Victor then had cameras hidden around the house, it took him only moments to figure out how to get around them without being detected, so he could listen in on Victor and Melissa Reid. (AD Day 20, strip 64) He let Chel know they knew as well. (AD Day 20, strip 159)